Right after he was born, we noticed that our son Connor had some difficulty breathing. We hoped it was just a floppy airway that would develop as he got older. The day he turned five months old, his breathing became so labored, we took him to the UC Davis emergency room. Because his oxygen levels were so low, chest x-rays were done. The x-ray showed a mass in his chest. We were told that the mass was so large, it was pushing his organs off to the right side of his chest. During the ER visit, his breathing got so bad, we had to hold him upright to keep his airway open. He also had a cold that contributed to the airway swelling.

We were rushed to the PICU where he was intubated and sedated. The first night was the scariest. It was our first hospital visit and we didn't know what to expect. The biopsy they performed on the mass revealed it was neuroblastoma.

Once you hear that diagnosis, you have no idea what the next year will look like. It was all terrifying. At first, the word “cancer” wasn’t used, and I didn't process the meaning when they called it a “mass”. I just couldn’t take it all in. It took a couple more days to really understand that it meant that my five month old had a tumor in his chest. Once we learned his diagnosis, it was nice to know that there was a name for it and that there was a protocol we'd be following.

Having a plan also provided some comfort. Chemo was started right away and the chemo blasted the tumor enough in the first treatment that his airway opened a little bit. At that point they took the breathing tube out. We stayed in the PICU because of his rocky breathing and cold symptoms. We were in the PICU for 4-5 weeks. We did two rounds of chemo in the PICU. It shrunk the tumor enough that we were transferred to the children's floor and were able to take him home after a week. After the tumor had shrunk, we were able to see a before and after picture of the tumor.

When we saw how far his organs were pushed out of the way, that's when we realized how serious it had been. The next two rounds of chemo were done at the Cancer Center.

It was our experience that UC Davis Health System has the best available services. It’s so great how everything’s connected. I love how willing UC Davis is to coordinate care across centers. They saved my baby's life – that's the most important thing I could ever ask for. He bounced back and he is healthy and happy. That he is now a normal baby is a true inspiration. On June 17, we had our six-month check-up appointment. The tumor has not returned. We are so relieved, thankful, and happy. 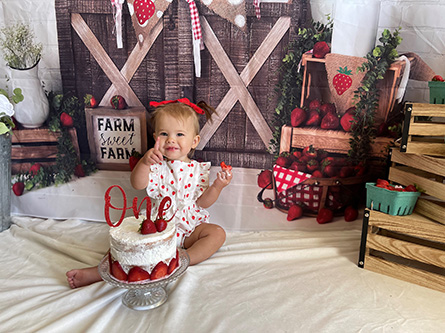 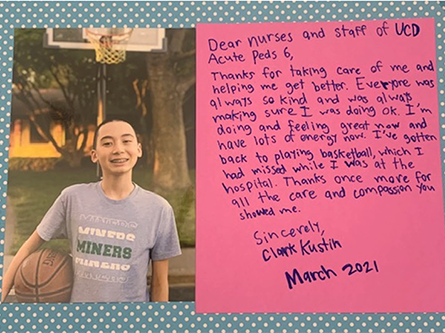 We love to hear from our kids after their pediatric experiences