May is Melanoma Awareness Month and as summer approaches and sun exposure increases, it is important to note that melanoma is one of the most common cancers in people younger than 30, especially young females. Melanoma is an aggressive form of skin cancer that can be fatal.

A young Sacramento woman knew all too well the risks she faced—and her vigilance paid off when she spotted suspicious growths not once, but twice.

As a kid growing up in Fresno, Kelsey Kelley said she spent a lot of time in the pool, and summer sunburns, although only a few, likely contributed to her melanoma diagnosis when she was only 21.

“It was shocking to find out I had melanoma,” said Kelley who, a decade later, is coping with a return of her cancer. Kelley shared something in common with many of her family members of Scottish descent: fair skin and moles. Even though she visited a dermatologist annually to check her skin and remove suspicious moles, she wasn’t prepared for what she spotted on her forehead near where she commonly parted her hair.

“It was a strange-looking mole that was changing color,” Kelley said. Still, she wasn’t too worried because all the other moles that were removed previously turned out to be benign.

This mole, though, was melanoma.

“It was a lot to deal with during my senior year at Cal Poly,” she said. “Some of my hair was shaved and I walked around campus with a big bandage as I prepared to graduate.”

Life went on, though. A dermatologist in her hometown performed the surgical removal of the melanoma, which was the only treatment required at the time.

A few years later, Kelley’s mother, in her mid-50s, also was treated for melanoma.

Fast forward 10 years: Kelley was a busy environmental consultant in Sacramento, getting ready to marry her fiancé Brian, when two crises hit. First, the COVID-19 pandemic arrived, forcing the delay of her November 2020 wedding, and then she received more unwelcome, unexpected news: her cancer was back.

Kelley said she “felt something hard and circular on my left cheek” in the spring of 2021. An ultrasound and biopsy at UC Davis Comprehensive Cancer Center confirmed it was a cancerous mass. This time the cancer was in a salivary gland known as the parotid.

That’s when the cancer center booked an appointment for her with innovative oncology surgeon Cameron Gaskill, an internationally recognized expert specializing in the treatment of patients with cancers of the stomach, pancreas and skin. Gaskill, who completed a fellowship in complex general surgical oncology at MD Anderson Cancer Center in Houston, Texas, is highly skilled in robotic surgical techniques.

As part of Gaskill’s aggressive approach with Kelley’s treatment, he teamed up with the UC Davis Department of Otolaryngology — Head and Neck Surgery to perform the intricate operation on Dec. 10, 2021, to remove Kelley’s affected parotid gland as well as 28 of about 200 lymph nodes in her neck, as a precaution.

“Fortunately, Kelsey’s recurrence was limited to her lymph nodes and parotid gland, and she was responding well to immunotherapy,” Gaskill said. “The best chance to cure Kelsey was to perform surgery and remove all of the remaining cancer.”

Kelley said that along with Gaskill and the surgical team, her UC Davis medical oncologist, Scott Christensen, has been an instrumental part of her positive experience while being treated at the cancer center.

The staff at the cancer center showed an interest in me beyond my cancer. That really made a difference as I got through my treatment.”—Kelsey Kelley, melanoma patient

“Kelsey benefited from recent advancements in melanoma treatment due to immunotherapy,”  Christensen said. “She has tolerated treatment immensely well and her immune system has shown a terrific response.”

Melanoma is a cancer that responds well to immunotherapy, which improves the body’s natural ability to fight cancer.

Kelley received nine rounds of Opdivo prior to her surgery, after which she was given another three rounds. Her last infusion at the cancer center was on March 3, one week after she turned 32.

“We’ll be celebrating soon in Hawaii,” said Kelley, who added that her long-awaited nuptials finally took place on Sept. 25, 2021, at the Crocker Art Museum.

Kelley said her husband, Brian, and other close family and friends — as well as her golden retrievers Maldon and Roux — have been her main source of strength. But, she feels the medical professionals she met at the cancer center also supported her emotionally by making sure that she was treated as more than just a cancer patient.

“The staff at the cancer center showed an interest in me beyond my cancer,” Kelley said. “That really made a difference as I got through my treatment.”

For more information, go to the UC Davis Comprehensive Cancer Center melanoma information webpage or call 1800 770-9261 to make an appointment. 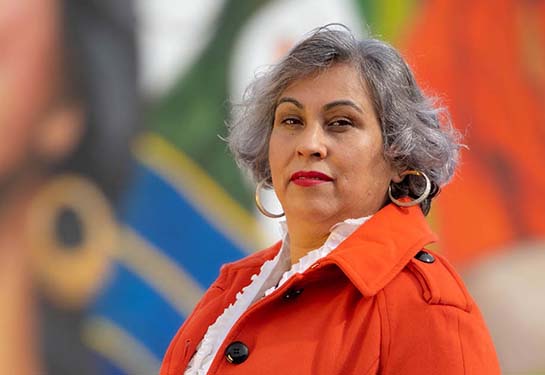