Scholars and criminologists have examined the relationship between urban decay and violent crime for decades. A new study of Detroit from the University of California Firearm Violence Research Center at UC Davis Health shows that the transition from dilapidated buildings and unkempt lots to violent crime is not as inevitable as the landmark “broken windows” theory would suggest.

“My research suggests there are more opportunities to address neighborhood decline than what is suggested by the broken windows theory,” said Alaina De Biasi, a postdoctoral fellow and author of the study. The research was published in The British Journal of Criminology.

The broken windows theory proposes that unattended disorder — such as broken windows that are not replaced — lowers the benchmark for acceptable behaviors in a neighborhood and leads to more disorder and inevitably more serious crimes. The theory was introduced by James Q. Wilson and George L. Kelling in a 1982 article in The Atlantic.

Without early mitigation, the theory goes, these neighborhoods reach a tipping point, beyond which efforts to reduce violent crime are likely to fail without extensive resources. Wilson and Kelling felt the key was to dedicate resources to neighborhoods that were at the tipping point “where the public order is deteriorating but not unreclaimable.”

Wilson and Kelling’s landmark theory went on to have a tremendous impact on policing practices, including how and where crime prevention resources are allocated.

Broken windows in the Motor City

Detroit was once one of America’s most prosperous cities, but over decades has fallen into a severe decline, with large swaths of neighborhoods simply abandoned. In 1950 the city had a population of 1.8 million. By 2016, that number had plummeted to 680,000. Detroit is also ranked as America’s most dangerous city.

Wilson and Kelling’s theory stuck out to De Biasi, who grew up in the metropolitan Detroit area and studied at the nearby University of Michigan, Dearborn. “I saw these visible signs of deterioration and how it played into neighborhood decline and neighborhood violence. That’s how I became interested in doing the study.”

De Biasi focused on physical disorder using open source data from the Motor City Mapping Project to analyze the impact of Detroit’s deterioration and abandonment on violent crime. The project surveys every parcel in Detroit and collects information on the physical condition of that parcel.

“The data look at things like, is it abandoned property? Does the property have fire damage? Is the property a dumping ground for trash?” De Biasi said. 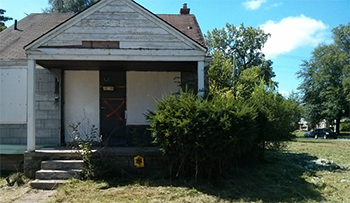 Detroit was once one of America’s most prosperous cities, but over decades has fallen into a severe decline.

For her analysis, she used a statistical method that allowed her to compare physical disorder in neighborhoods with levels of violent crime.

“But my study doesn’t find a huge jump — a tipping point. I found a slower increase than what’s expected based on Wilson and Kelling’s tipping point. I’m calling this an attenuated threshold effect,” De Biasi said.

She notes that in terms of reducing overall crime levels, a focus on crime hot spots is likely the superior policing approach for any given neighborhood. However, neighborhoods in which disorder and violence are growing issues shouldn’t be ignored.

“The significance for cities like Detroit experiencing urban decay is that there are likely more places beyond that midrange level of disorder in which traditional broken-windows strategies could be applied. For residents, what it means is that even if your neighborhood is challenged, it’s not slated to go into a steep decline,” De Biasi said.

De Biasi notes that the amount of devastation is pretty extreme in certain parts of Detroit, and that policing is an integral part of decreasing violence. But she adds that policing is part of a larger community effort.

“If communities know that there’s not an irrevocable ‘tipping point,’ into violence, it could lead to better outcomes for these areas and more opportunities for residents to work toward reducing disorder, fear and violent crime,” De Biasi said.

It also means that community-driven efforts to rebuild and remake rundown neighborhoods may be effective. She notes that things like community gardens often act as an anchor point in reestablishing neighborhoods and help to build informal social control and collective efficacy.

“Detroit is in the process of rebuilding. I think things have come a long, long way and ultimately, I think Detroit’s future is bright. It is undergoing a reinvention. We are trying to think of creative ways to solve some of these really complicated problems,” De Biasi said.

While her study focuses on Detroit, its findings may apply to other cities experiencing urban decay, including those in California. She is interested in conducting follow-up studies across a variety of neighborhood contexts to determine whether her Detroit findings hold up.