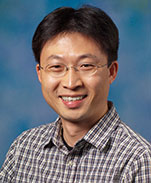 The roles of centrosomes and cilia in development and disease

My laboratory is interested in understanding how the centrosome and its related organelles such as the cilium coordinate signals that regulate cell function and influence development.

The centrosome consists of a pair of centrioles and the surrounding pericentriolar material (PCM), and serves as the main microtubule-organizing center in animal cells. The composition of the PCM is dynamically regulated throughout the cell cycle. Recent studies show that the PCM adopts an orderly organization, instead of an amorphous “cloud” suggested by earlier studies. However, the functional significance of this structured but yet dynamic PCM arrangement is largely unknown. The centrosome also plays essential roles in establishment of cell polarity and regulation of asymmetric cell division. In differentiated cells, the “mother” centriole (the older of the pair) can transform into the basal body, from which two types of microtubule structures—motile and primary (non-motile) cilia—nucleate and protrude from the cell surface. Motile cilia are restricted to certain populations of cells, including those in the airway, brain ventricle, and oviducts, and exhibit a rhythmic beating motion. They function, for example, to clear the mucus in the airway. However, the non-motile primary cilia are present in nearly all cells and are thought to act as a sensory “antenna” for the cell.

Dysfunction of centrosomes and cilia has been linked to a plethora of human diseases, including cancer, dwarfism, microcephaly (disorders with small head size), and various ciliopathies (diseases caused by dysfunction of cilia). However, little is known about how the perturbation of these centrosome-related functions leads to a wide spectrum of disorders.

Using a combination of approaches encompassing proteomics, cell biology, zebrafish genetics, and in vivo live microscopy, we aim to dissect the roles of centrosomes and cilia in various biological contexts, including neurogenesis and cell signaling. Our research goal is to bridge the knowledge gap between centrosomal dysfunction and manifestation of disease phenotypes. Understanding the gene-phenotype relationship is the first step to therapeutic intervention for centrosome-related disorders.

Some of the questions we are pursuing include:

The department of Cell Biology and Human Anatomy is in the Top 20 and ranked 7 nationally for 2021 National Institute of Health (NIH) funding. Congratulations!!

Blogosphere as a means of scientific communication?

Professor Paul Knoepfler explains why he joined the ranks of the blogosphere, and why you should too.