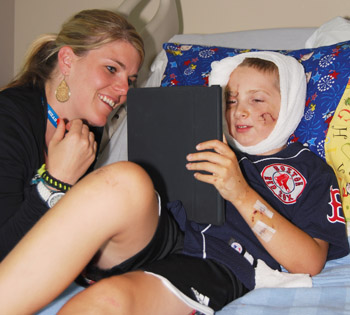 David Sahar was at home with his family at around 1 p.m. on Sunday, Aug. 11, when, as the on-call plastic surgeon at UC Davis Children’s Hospital, he received a page. His heart sank as he read it. A 10-year-old boy from Martinez, Calif., had been brutally mauled by two pit bull dogs while visiting a friend’s home in the nearby San Francisco Bay Area suburb of Antioch. The child had experienced multiple severe injuries to his face, head and arms and would require reconstructive surgery.

His name was Hunter Kilbourn. He was en route to the Pediatric Trauma Center at UC Davis via helicopter and would arrive shortly. Hunter was not the only patient who Sahar had treated for animal bites and, sadly, most of those attacks had involved pit bull dogs and children.  As he left home, he feared the worst but hoped for the best.

Sahar performed his internship and residency at the University of California, San Francisco – East Bay, and a post-doctoral fellowship in craniofacial disease and development at Stanford University. He had completed his plastic surgery training at the University of Texas at San Antonio. He has been a member of the faculty at UC Davis Medical Center for three years. “Still, nothing can prepare you for treating a young child for a dog attack, no matter how many times you’ve seen them,” he said.

“When a person is bitten by an animal,” he continued, “time is of the essence. Infection always is a huge concern. Often there is significant tissue loss, so skin grafting may be necessary, complicating the reconstruction.”

“We presented this case between the first and the second surgeries to multiple plastic surgeons here at UC Davis and our community plastic surgeons during our grand rounds, to come up with a consensus decision on how we should treat the patient. Because we are a large academic medical center we have a unique environment in which we can treat very complex, difficult problems.”
— David Sahar

In Hunter’s case the attack, while severe, could have resulted in far greater damage, Sahar said. The dogs had bitten the child on both sides of his face and had removed tissue, including a portion of his eyelid, right temple and right ear. Nevertheless, there was no damage to the underlying bone or his eyes, for example. He retained most of his facial expression capacity on the right side of his face.

“One of the things that we worry about most with facial injuries is damage to the facial nerve, which controls facial expression. That’s how we express our emotions, give other people non-verbal cues, and smile. If that’s injured it has really important social developmental implications, especially for a young child,” Sahar said.

Hunter entered the operating room at 4:29 p.m. and would not leave until approximately 8 p.m., Sahar said. During that time Sahar and his team meticulously cleansed his many wounds and rushed to preserve the damaged facial tissue where possible.

“We repaired wounds on the right side of the face, the right ear, performed a flap to the left cheek, and repaired wounds on posterior scalp and left forearm. Hunter had lost the lateral third of his eyebrow, part of his eyelid, and a portion of the right temple area in the front of his ear was gone. The laceration essentially extended from the middle of his forehead, rightward across his nose, extending multiple lacerations around his right ear. Essentially we performed five procedures at once,” he said.

Two days later, the reconstructive surgery team would treat Hunter in a second procedure, grafting an approximately 10 centimeter skin graft onto the right side of his face where the dogs had removed tissue. Hunter’s face was bandaged to compress it and encourage the graft to adhere to the graft location and encourage blood vessels to connect from the skin graft to the recipient site to form collagen and heal.

“There was a lot of thought that went into how we cared for Hunter,” Sahar said. “We presented this case between the first and the second surgeries to multiple plastic surgeons here at UC Davis and our community plastic surgeons during our grand rounds, to come up with a consensus decision on how we should treat the patient. Because we are a large academic medical center we have a unique environment in which we can treat very complex, difficult problems.”

Sahar said that it’s too early to tell how much scarring Hunter will have, but it will be significant. 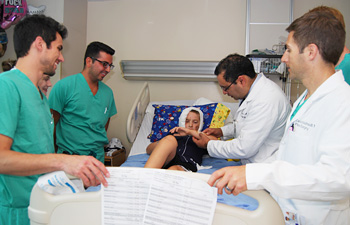 “If you have scarring and you’re a younger person, you tend to heal better,” Sahar said. “We can do certain things for scar management, such as lasers and compression garments that we can use to help improve aesthetic outcome, and that’s something that we can entertain as we go forward in collaboration with our plastic surgery colleagues at Shriner’s hospital for Children.”

Hunter left the hospital to return home on Aug. 20, but he will return many times in the days and weeks ahead to manage his recovery. His case has captured the thoughts and prayers of the people of Northern California, including the Oakland A’s, who sent memorabilia including a signed picture and baseball from outfielder Josh Reddick. Reddick has even invited Hunter to take batting practice with the team when he is feeling better.

“We are gratified to be the ‘go to’ hospital for complex reconstructive surgery, especially for children like Hunter,” said Diana Farmer, chair of the Department of Surgery and surgeon-in-chief for the children’s hospital at UC Davis. “Our single-minded goal is to put the latest science and surgical techniques to work so children can return to health and their normal lives quickly as possible.”

The two dogs involved in the mauling have been quarantined at the Antioch Animal Shelter and their owners have requested a hearing regarding whether they should be euthanized.