The medicine of movement

When a sports injury placed Julian on the bench, our doctors were able to get him back on the basketball court and in playing shape. 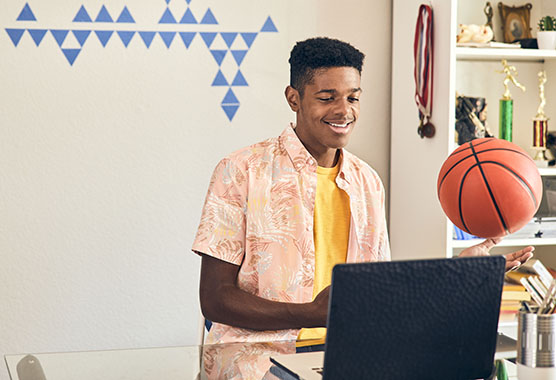 For 15-year-old, Davis native Julian, playing basketball has always been about more than just a game.

When Julian was only five years old, his mom Karla helped him join his first sporting league, a non-competitive soccer team for elementary school children, as a means to help him develop his social skills with other kids.

When she realized that all of the activity was overstimulating for Julian, she took him to an occupational therapist who informed her that he was on the autism spectrum and likely wouldn’t be able to handle sports.

But through the years, Julian continued to rise above all expectations.

By middle school, Julian was a straight-A student, playing basketball and running track after classes. When try outs for the Davis High School basketball team began for freshman, he not only made the team – but he became the captain.

“He was going to practices all the time and made it through the first season of tournaments, but I remember he came home on a Friday and just said, ‘I hurt my foot’,” Karla says.

That weekend he played in the next tournament, but it was clear he was beginning to limp. In the next game, he was only two plays in when another player stepped on his already injured foot and Julian fell to the ground.

“But he still got up. It was only after that game that he asked to go to the doctor,” Karla explains.

It was the last week of school and Julian had found himself with what could develop into a serious injury if it wasn’t checked out immediately. His regular pediatrician was often difficult to reach for last-minute appointments, so Karla reached out to UC Davis Health instead.

They got him in that same afternoon.

At the appointment, UC Davis Health primary care physician Dr. Cheryll Clark ran an exam and immediately sent Julian for an X-ray to determine what was causing the pain.

At the same time, Dr. Clark began the complex job of explaining to a sports-obsessed teenager that time off the court is just as important as time on the court when it comes to keeping your body in shape for the game. Not just for this injury, but for the duration of his sports career.

After discussing the right course of action with Julian and Karla, Dr. Clark put together a plan.

Even though the final X-ray results hadn’t shown a significant fracture, it didn’t mean there wasn’t a smaller one that had developed. And worse, there was still a chance of tendon damage – a critical issue for a young person still growing. Any damage done today could mean permanent damage in the long run.

Out of an abundance of caution, Dr. Clark recommended not playing basketball in the upcoming summer session. Instead, Julian would need to wear a brace on his foot and use crutches, so he wasn’t tempted to walk on it and risk re-injury.

Dr. Clark had formed a bond with Julian over the appointments and understood what basketball meant to him. While she knew it would be disappointing to hear, it was more important to fully heal so he could play his best and eventually apply to the big sports universities he has his eye on in the future.

For Karla, seeing Dr. Clark communicate with Julian was the most valuable experience of all:

“This is a kid who thinks ball is life, but there was a trust relationship built between Julian and Dr. Clark. He even feels comfortable going to the doctor alone now and has learned it’s important to have ownership over his own health. He’s done such a good job of listening to what the doctor says.”

By the end of summer, Julian was ready to start playing basketball again.

This is a kid who thinks ball is life, but there was a trust relationship built between Julian and Dr. Clark. He even feels comfortable going to the doctor alone now and has learned it’s important to have ownership over his own health.—Karla, Julian’s mom

Today, Julian is playing ball as strong as ever, but the biggest difference is his diligence in listening to his own body and when it needs time to heal.

He’s also communicating with his coaches when something doesn’t feel right.

During a practice not too long ago, he fell. Instead of waiting, Julian made the decision to go back to Dr. Clark and get it checked out immediately. While it was only a minor strain, he knew it was the right choice to sit out for a while. He gave himself time to heal and followed the right procedure to get back on the court.

For Julian, one injured foot led to a lifetime of understanding what his body needs to be healthy through exceptional primary care.

“Our experience at UC Davis Health was nothing short of fantastic,” Karla says.