Nadine Burke Harris (M.D., ’01) has made it her life’s work to underscore the lasting health damage that can follow episodes of toxic childhood stress. As California’s inaugural surgeon general, she’s calling on fellow providers and policymakers to help her drive transformative change.

When Gavin Newsom became California’s 40th governor in January, he appointed an influential UC Davis alumna to do something drastic — persuade an entire state to realize the lifelong health consequences caused by childhood adversity.

He couldn’t have found a more passionate or experienced advocate than Nadine Burke Harris, a 2001 graduate of the UC Davis School of Medicine. The San Francisco-based pediatrician has made a career of educating physicians, teachers, parents, children, social workers, politicians, YouTube audiences — everyone, really — about Adverse Childhood Experiences, or ACEs.

Almost everything we know about ACEs comes from a landmark 1998 study by the U.S. Centers for Disease Control and Prevention and Kaiser Permanente, passages of which Burke Harris frequently cites. The study connected the dots between challenging or unfortunate things that happen to kids — such as being raised by a parent who abuses alcohol — and serious health risks later in life, like heart disease.

Now, as the Golden State’s first-ever surgeon general, Burke Harris is tasked with urging policymakers at every level of government, and leaders across California, to join her battle against ACEs and toxic childhood stress. Her goal: to heal children’s brains and bodies before they become adults.

Here is an edited interview with Burke Harris several weeks after she was sworn in as surgeon general.

Q. You’ve been appointed to this amazing and unique position. Was this a natural, next step in your career?

I don’t know that anyone ever imagines being appointed the first-ever surgeon general for the state of California. That said, now that I’m in the role, it does feel like a natural next step. I’ve been in the role of clinician, researcher and advocate. It’s been a real exciting journey, and this is like a dream come true.

Q. What would you like to achieve in this new role?

When we think about iconic surgeons general, we think about physicians whose role is to help the public understand not just the things that evidence shows us are good for our health — eat right, exercise, don’t smoke, all that great stuff — but also to focus on the areas of the public health crises that most people don’t know about. I believe strongly that the issues of Adverse Childhood Experiences and toxic stress are the public health crises of our day, and we have an opportunity to achieve transformative change in terms of outcomes.

I will be working very hard in that area to not only support implementation of universal screening for Adverse Childhood Experiences, but also advance the science around toxic stress.

Q. How much of that is doable?

I’m ambitious, I think there’s a lot we can do. We have a governor who ran on a child health and well-being platform, who recognizes the importance of this issue. I think there’s actually quite a bit that can be done. Especially since, keep in mind, the state of California passed a law to require that all individuals on Medicaid — children and adults — be screened for Adverse Childhood Experiences, and that law is set to be implemented in January 2020. There’s a tremendous amount of work to be done, but California is already leading the way on this issue and I think that’s only going to continue.

Q. How many people have been exposed to ACEs?

Adverse Childhood Experiences (ACEs) is the term used to describe all types of abuse, neglect and other potentially traumatic experiences that occur to people under the age of 18.

Nearly 17 percent of Californians have experienced four or more ACEs.

Q. Why should these numbers matter to Californians?

Q. What did you learn from UC Davis School of Medicine?

I have to say, I loved UC Davis. It’s really where I learned how to be a community physician. I very much learned how to listen to my patients, which is what cued me into observing this pattern: My patients who were having the worst health outcomes were also the ones who had the greatest doses of adversity in their childhood. I was also the co-director of the Imani Clinic, which was a student-run health center, so I spent my Saturdays caring for uninsured or underinsured patients.

I had this incredible experience of really connecting with vulnerable communities and doing my best, working and fighting to try to improve their health. It really got me to see and listen and experience firsthand the challenges and struggles a person experiences, and how that has a dramatic effect on an individual’s health. That was a formative experience for me.

Q. Who were some of the more influential people you recall from medical school?

There were a number. Dr. Doug Gross was one of my early professors, and what I learned from him is that he just took so much tremendous joy in the work he did; he loved science, he loved medicine, he loved teaching, and made it a lot of fun to learn.

Dr. Faith Fitzgerald was also influential. When I was getting ready to apply to public health school and contemplating applying to Harvard, I was nervous like any student and worried about whether I would get in. She just looked at me and said, “You know what? There’s no way to know how you are going to finish in a race unless you know who else is running, so just get out there and run your best. Better to have tried and failed than not have tried at all.” She was just awesome. She’s the type of professor that just completely inspired her students, not only with the standard of excellence that she held as a clinician, but for the way she encouraged me personally and helped to allay some of my anxieties.

Q. What can the UC Davis School of Medicine and Betty Irene Moore School of Nursing at UC Davis do to support your agenda?

The students at UC Davis actually pushed to include training on Adverse Childhood Experiences and toxic stress as part of their curriculum. I think every member of the scientific and medical community is currently caring for patients who have an overactive stress response that may be disrupting their health. There’s not one of us who is not seeing patients who are experiencing toxic stress.

All of us in the medical community have an opportunity to be a part of advancing clinical practice, advancing research, advancing science and supporting trauma-informed systems and practices. Our students have experienced ACEs, our colleagues have experienced ACEs, so bringing some of these trauma informed and trauma-sensitive practices into our workplace, into our teaching, into our ways of practicing, is critical. 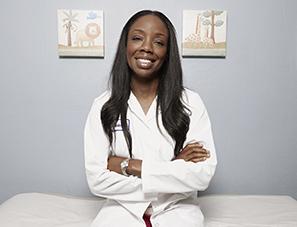 See what our surgeon general has accomplished since graduating from the UC Davis School of Medicine.

Learn more about her TEDMED talks, honors, and what she developed for fellow physicians.