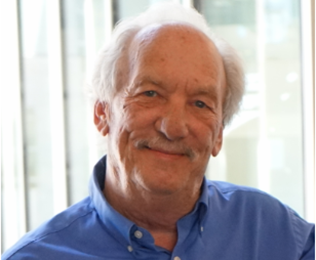 John Drummer, a longtime UC Davis School of Medicine academic coordinator and a beloved colleague and friend to many around the school throughout its entire history, passed away last September shortly after his summertime retirement.

Drummer was an institution at UC Davis due to both his expertise and his attitude toward others. Those around
him said he touched the lives of countless future physicians in multiple ways, including through his good nature in everyday encounters, his knack for the nuts and bolts of the curriculum, and his generosity and advocacy around non-traditional medical students.

“It is hard to imagine he is no longer with us, and some of us continued to informally consult with him even after his retirement last year,” Servis said. “His death is tragic and a reminder to us all of how precious life is, and that we should treasure every moment now with those we love.”

His contributions to medical education at the School of Medicine are innumerable, but highlights include the adoption of new technologies to support medical student education, including simulation and standardized patients, and the promotion of new pedagogies such as Doctoring, problem-based learning and team-based learning. Drummer was also the school’s unofficial historian.

He was a consummate professional, kind and considerate to all, and a fount of wisdom on all things related to medical educationMark Servis, Vice Dean for Medical Education

Recently, Drummer had played an important role in a comprehensive plan to update the School of Medicine’s curriculum, now scheduled for implementation this coming academic year. Known as I-EXPLORE, short for Integrated Explorative Patient and Learner-Oriented Education, it is the culmination of 18 months of hard work by a core design team who consulted with hundreds of faculty, students, residents, staff and community members. Drummer provided the principal staff support to this effort and patiently assembled outside resources and organized design team activities.

“John so enjoyed thinking of new solutions to old problems, while also being an excellent listener who fully acknowledged and respected all points of view,” said Kristin Olson, associate dean for curriculum and medical education. “We’re all deeply grateful for the tremendous work he did in getting us to where we are today.”

Drummer never missed his two favorite School of Medicine events, Match Day and Commencement. He enjoyed meeting the friends and family members of students he had come to know so well, and his smiling face could always be seen in the crowd.

Drummer is survived by his wife Lynn, their children, and the many family members and friends that were blessed to know him. The School of Medicine helped stage a virtual memorial service, with remarks by colleagues and musical performances by medical students. A recording is available at: http://ucdavis.health/Drummer-memorial. The Office of Medical Education also solicited messages, stories and photos for a memory book presented to Lynn.

The School of Medicine has established the John Merrill Drummer Scholarship, which will continue Drummer’s legacy of caring by providing need-based awards to non-traditional medical students. The fund’s page is give.ucdavis.edu/MEDI/324711.

Morris Pleasant, M.D. ’75, R.S. ’77, passed away in September 2020. Dr. Pleasant was a prominent and beloved psychiatrist who practiced in the Sacramento area for more than 40 years.

Dr. Pleasant was born in Taft, Texas in 1946, and attended the UC Davis School of Medicine. During his residency, he received the distinct honor as a Child Fellow at the University of Boston medical school.

In 1977, Dr. Pleasant started his private practice in East Sacramento. He went on to work for many board and care homes throughout Sacramento County, and also the Oak Park Community Center, Sutter Health and Sutter Center for Psychiatry. Notably, he was appointed three times as Sutter’s Chief of Psychiatry.

His affiliations included the African American Mental Health Professionals (founding member), Omega Psi Phi, Capital Medical Society, American Psychiatric Association, Golden State Medical Association and National Medical Association. He was loved by his patients, and was diligent and committed to patient care up to the very morning of his untimely death.

Excerpted from an obituary published in the Sacramento Bee.

Terril Spitze, M.D. ’75 passed away from COVID-19 pneumonia in January at age 70. He had spent almost four decades serving the Mother Lode region as a Sonora-based internist.

Dr. Spitze was born in Kansas in 1950 and raised in San Jose. Following medical school, and an internship and residency at the VA in Martinez, he worked briefly in Bay Area emergency rooms until he spotted a job opening in Sonora. The outdoor lover opened a private practice as an internal medicine specialist in March 1979. He was also appointed as head of respiratory therapy at the now defunct Tuolumne General Hospital, and served on the cardiac rehabilitation committee at Columbia College.

Excerpted from The Union Democrat

Sue Hammond Innes, M.D. ’82, passed away of cancer in December. She was the first person in her family to go to college, and went on to become a pathology professor, researcher and department leader at one of the nation’s best children’s hospitals.

She was born in 1952 in Willits, California, and attended Stanford University and then Harvard for an MPH, before adding her M.D. at UC Davis (where she met her husband, Jeff Innes, M.D. ‘81). She pursued a residency in pathology at Ohio State University, and was board certified in both anatomic and laboratory pathology. After serving on the faculty of OSU for five years, she completed a fellowship in pediatric pathology at Nationwide Children’s Hospital in Ohio. For the last 10 years of her career before retiring as a full professor, she served in a chair position with more than 450 employees under her guidance.

Her research focused on the long-term health of childhood cancer survivors with a small group of researchers from children’s hospitals across the U.S., collaborations that resulted in more than 75 research papers. After living in Columbus for more than 30 years, she and Jeff retired to Asheville, North Carolina. Her interests included travel, attending Chautauqua, quilting, Ukrainian Easter eggs, German paper cutting, painting, block printing, Jeopardy, reading, and promoting scientific literacy.

Longtime faculty member John (Jack) Rutledge, M.D., (Fellowship ’83) passed away from cancer in January. Dr. Rutledge was a professor of cardiovascular medicine, Vice Chair of Research in Internal Medicine, and the inaugural Richard A. and Nora Eccles Harrison Endowed Chair for Diabetes Research at the UC Davis School of Medicine.

Born in rural Kennedy, Texas in 1949, Dr. Rutledge completed a cardiology fellowship at UC Davis in 1983, and joined the faculty as an assistant professor the following year. He and his future wife, UC Davis cardiovascular medicine professor Amparo Villablanca, met on the wards at UC Davis during their medical training.

Dr. Rutledge went on to devote nearly 40 years to his patients, teaching, research, and service to UC Davis, contributing greatly to the development of the Department of Internal Medicine and shaping the Division of Cardiovascular Medicine. He held several leadership roles prior to his retirement for health reasons last December, including Chair of the Physiology Graduate Group, Chief of the Division of Endocrinology, Clinical Nutrition and Vascular Medicine, and Co-Vice Chair for Research in the Department of Internal Medicine.

Dr. Rutledge co-authored more than 150 manuscripts which have had a major impact on the field of vascular biology, atherosclerosis, and lipid metabolism. He also helped many science trainees and early-career faculty to achieve independence and success, and received one of the inaugural Dean’s Excellence in Mentoring Awards.

Peter Franklin, M.D. ’87, passed away of cancer in January 2020. He was the first person with quadriplegia to be admitted to a medical school in California, and went on to have a remarkable career as a physician.

Born in 1957 in Toronto, Canada, Dr. Franklin immigrated with his family to Los Angeles in 1965. At age 19, he suffered a complete spinal cord injury following a surfing accident. But despite seemingly insurmountable obstacles, he was determined to become a physician and refused to allow his physical limitations to deter him from achieving his dream.

Following his graduation with honors from medical school, he completed a prestigious internal medicine residency at Cedars Sinai, and a second residency in PM&R at the renowned Rancho Los Amigos National Rehabilitation Center.

Dr. Franklin practiced PM&R in the Woodlands and throughout Montgomery County, Texas for more than 25 years. He will always be remembered by his patients for his heartfelt empathy and professionalism, and will be dearly missed and remembered by all for his exceptional courage, determination, kindness and irreverent sense of humor. He is survived by his wife, Rita Franklin; brother, Philip Franklin (Terry); and niece, Erin Coleman (Jon).

Excerpted from an obituary published in The Woodlands Villager

Irene May-Ling Hutchins, M.D. ’12, Residency ’15, passed away in 2020 at age 37. The hematologist-oncologist was a highly esteemed, accomplished doctor — and also a former professional ballroom dancer, who used her passion for the sport both to inspire individual patients and fundraise for health and community nonprofits.

A native of San Francisco’s North Bay, Hutchins became a professional ballroom dancer at age 20, winning a Pro-Am national championship title in international Latin dance before going onto medical school. After her medical training, she practiced hematology/medical oncology at Desert Regional Medical Center, with a special interest in lung cancer.

While an oncology and hematology fellow at Scripps/MD Anderson Cancer Center, Dr. Hutchins ballroom-danced as a feature act at cancer fundraisers. It began when she made a pact with a patient — a former dance instructor — that when he recovered, they would dance together. After they choreographed a performance for Scripps Survivor Day to cancer patients, they were featured on national television and went on to dance at many other charity events. They eventually founded Dancers Vs. Cancer, a campaign for the Leukemia and Lymphoma Society.

Dr. Hutchins also served on the society’s board of trustees, and was awarded the society’s 2018 Woman of the Year title for her philanthropic work in support of blood cancer research.