The study results published in JAMA Network Open today show Black women and Latinas as well as less-educated and lower-income women have not been able to obtain 3D mammography as easily as white, well-educated and higher-income women.

The research team reviewed 2.3 million breast screening exams collected by the national Breast Cancer Surveillance Consortium from 92 imaging facilities across five states. That makes it the largest-ever study of U.S. access to digital breast tomosynthesis (DBT), commonly referred to as 3D mammography. The exams were performed between January 2011 through December 2017.

The 3D technology is more accurate than traditional digital mammography. It can detect more cancers and yields fewer false positives. The study showed access to the breast screening technology has not been equitable, even though it was approved by the Food and Drug Administration a decade ago. 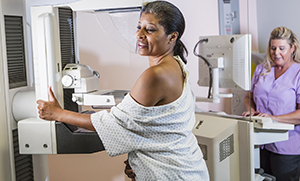 “The women with poorer access to 3D are already traditionally underserved and more at risk for greater morbidity and mortality from breast cancer,” said Christoph Lee, professor of radiology at the University of Washington School of Medicine and lead author of the paper.

Underlying disparities may prevent access to the most advanced breast screenings

The study did not address whether structural racism in health care or out-of-pocket costs might contribute to the lower access, but Lee and Miglioretti said they can be real barriers.

The authors also say women with higher education might have more opportunity to explore health care options and to know about 3D mammography’s benefits and might seek facilities where 3D mammography is available and perhaps even ask for it directly.

Surprisingly, facility location – urban vs. rural – was not a major factor of 3D mammography availability. This is likely because rural facilities tend to be smaller, with only one standard mammography machine. When this machine is replaced it with a 3D unit, it automatically gives their entire patient population access to 3D mammography. That’s in contrast to urban facilities that usually have a larger number of digital units but often only replace one at a time with 3D-capable units—so some women get 3D, but others might not.

“Women of color already face health inequities when it comes to breast cancer screenings and limiting access to the latest technology could exacerbate the gap in preventative and diagnostic care,” said Miglioretti.

UC Davis Comprehensive Cancer Center is the only National Cancer Institute-designated center serving the Central Valley and inland Northern California, a region of more than 6 million people. Its specialists provide compassionate, comprehensive care for more than 10,000 adults and children every year, and access to more than 150 clinical trials at any given time. Its innovative research program engages more than 280 scientists at UC Davis who work collaboratively to advance discovery of new tools to diagnose and treat cancer. Patients have access to leading-edge care, including immunotherapy and other targeted treatments. Its Community Outreach and Education program addresses disparities in cancer outcomes across diverse populations, and the Center provides comprehensive education and workforce development programs for the next generation of clinicians and scientists. Through the Cancer Care Network, UC Davis partners with hospitals and clinical centers throughout the Central Valley and Northern California communities to offer patients expert care close to home.  For more information, visit cancer.ucdavis.edu.