When COVID-19 began engulfing the globe in March, Rory Stuart and his team could see the danger ahead – from the worst pandemic in a century and from potential assaults by the Taliban.

Rory Stuart and other medical and operational leaders reacted quickly to protect U.S. and NATO forces from both COVID-19 and possible assaults.

Stuart is a UC Davis Health emergency physician and assistant professor. He is also an Air Force Lt. Colonel. In March, when the coronavirus was sweeping across the planet, Stuart was the lead emergency physician at Bagram Airfield in northern Afghanistan, a NATO airbase controlled by American forces.

Stuart is both full-time Air Force and full time at the UC Davis Medical Center when he is not deployed. Along with fellow physician and Air Force Lt. Col. Roderick Fontenette, he helps direct the military residency program for the Department of Emergency Medicine.

The uncertainty of COVID-19

His tour in Afghanistan started in fall 2019 and he was scheduled to return in April. COVID-19 kept him there until the end of June. But in March, both medical and military leaders there were on the defensive.

“We were like the rest of the world, we didn’t know what to expect,” Stuart said. “But we had to plan for the worst. We said, ‘If this breaks as badly as we think it will, we are totally on our own.’”

Afghanistan shares a border with China and with countries such as Pakistan and Iran, where the coronavirus was raging. Stuart and the group had to build a plan to protect about 15,000 U.S. military personnel throughout Afghanistan, as well as people in NATO and coalition forces, diplomats, and contractors working on the bases – about 50,000 people total.

Stuart and his team faced a list of problems. They included:

“And remember,” Stuart said, “this is in a country where people are trying to kill us.”

On top of all of that, war zone medical facilities are not designed for long term care, let alone containing a pandemic.

“Our health care system there is set up almost solely for trauma – combat-related injuries, rapidly treated and almost immediately airvaced to Germany or the U.S.,” he said. “The specialty skills are heavy on emergency medicine and trauma surgery, not internal medicine and pulmonary critical care. We were not set up to have long term ventilated patients.”

Plus, at first, they could not airvac COVID-19 patients out of Afghanistan, because they did not want to endanger air crews or other operations.

Stuart said military commanders immediately saw the threats and reacted by including several key physicians, including Stuart, in that rapid planning group.

“Usually, the medical and operational sides of the house operate separately,” he said. “They’re used to spreadsheets and black-and-white questions of how to move people around the country or how many bullets we have. They had to learn the uncertainty of medicine.”

After some initial “adjustments,” as Stuart called it, the group moved quickly. They built a plan that started with locking down every base in Afghanistan. As much as possible.

“Each base became its own island,” he said. “On paper, that might sound easy enough, but it was pretty difficult to do. There’s always some ground flow for day-to-day operations and connections to local governments.”

And there was still air traffic into Afghanistan, both military and civilian flights. Many of the non-military flights brought contractors who hired on with companies in their own countries, then were sent to Afghanistan for jobs that help keep the bases running.

“They’re from every continent on the globe,” Stuart said. “Many had health issues and had no business being in Afghanistan, let alone being there during a pandemic.”

To deal with the air traffic, the bases began quarantining incoming people.

“Within 72 hours, we had 800 people in quarantine,” he said. “It was probably a week or two before we could stop the inflow. When the military turns on a spigot, it’s hard to turn off.”

They also shut down dining facilities, social halls and other gathering places. All meals were to go. And they required masks on all personnel.

Meanwhile, Stuart and medical personnel continued to plan for what they expected would be a COVID-19 surge.

“I really think some of the draconian measures had a big impact,” he said. “We locked down so early, it gave us time to do some creative things with the medical assets we had on the ground and to get more in.”

All of this was happening as negotiations with the Taliban were starting up, which meant political pressure for more interactions with people outside the base. 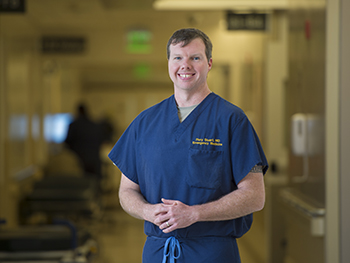 So, in early May, to see if the coronavirus was on the base, Stuart and his team started looking for it.

“We started by testing the people going into populations, like special forces and pilots,” Stuart said. “Sure enough, we started to find it.”

The first positives, not surprisingly, were among guards at checkpoints. But COVID-19 began to spread, even with the prevention measures.

“The first people hadn’t developed symptoms yet. Then we had one or two a week who were pretty sick. Then they started coming in bunches,” Stuart said. “Part of the problem was that given the size of the base, we couldn’t effectively social distance. We had 10 sick people from one contracting company and five from one country’s coalition force.”

The surge came late May into early June. But by then, the medical teams were better prepared on the ground, and they had developed an effective airvac system that could get NATO allies and U.S. forces out within 72 hours.

Their problem, however, was evacuating contractors. And some were the sickest patients on the base.

“We were trying to build a plan in a war zone in the middle of a pandemic,” Stuart said. “We couldn’t find aircraft to move them, international air flow was gone, and a lot their countries wouldn’t take them because their medical infrastructure was overwhelmed.”

But by June, the base medical infrastructure had expanded enough to handle the surge. Stuart and the team at Bagram Airfield had set up an entire tent hospital. More medical people and equipment were flown in. They had created much more intensive care capacity.

“The scary situation with large numbers of sick people started to unfold,” Stuart said. “But fortunately, it didn’t cripple the medical system because we were better prepared at that point.”

By the end of June, medical operations were stable, and Stuart was preparing to head home – more than 90 days later than initially planned. Before Stuart left, U.S. Army Gen. Austin Miller, the commander of U.S. and NATO forces in Afghanistan, came to the airbase and gathered Stuart and a handful of others to award them the Bronze Star for their work battling COVID-19.

“That was totally unexpected,” Stuart said. “I’m grateful to Gen. Miller for that. It also speaks to how high the stakes were. If we had swung and missed, there was the potential that the entire operation could have collapsed.”

Tomorrow: The unique partnership between UC Davis Health and the U.S. Air Force.