As the saying goes, necessity is the mother of invention. So local mom, Caren Roddy, husband Mark Roddy and their children Garrott and Eryn Roddy got busy. This Sacramento family was on a mission to stay busy and help the community at the same time - including front-line workers at area hospitals like UC Davis Medical Center.

“It started with simple things to give back. The kids leaving notes on neighbors’ doors. Garrott and Eryn did some sidewalk chalk, too,” said Caren Roddy. “But soon, we recognized the glaring imbalance between those of us at home and overtaxed healthcare workers. We knew we could do more.”

The family was on a mission. Mark Roddy, an architect and professor at Sacramento State, and his teenage son Garrott, took inspiration from a series of posts from Harvard, USC, Cornell and other universities that were utilizing 3D printers to make face shields, a form of personal protective equipment. They collectively thought, “We can do this.”

Father and son worked out some technical kinks and produced a few face shields to start. Their excitement grew when a local anesthesiologist friend looked at the prototype … even tried it on while on the porch, six feet away with a mask on. He was impressed.

The Roddys set a goal of 100 for the first round of production.

“Garrott was not too excited to begin with because it is such a long process,” Caren Roddy said. On average it takes about 30 minutes for each printed headband for a total of approximately 24 per day. 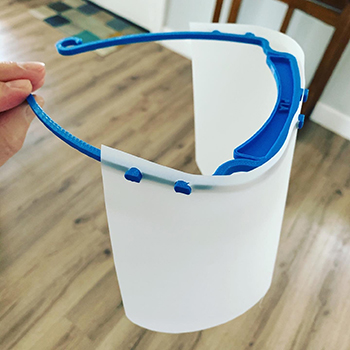 Once he had about 20 printed, the teenager began to see it as a hobby rather than a chore.

“I felt like I had a purpose. That there was something I could do other than crank out baby Yodas,” Garrott Roddy said. “Plus, it’s fun to do with my dad.”

All four Roddys got involved in assembly and two weeks later, the impact has been profound. Not only have they helped fight COVID-19 by staying home, they’ve united as a family to support local health care workers, too.

“It felt so good to do something together that would benefit others,” Mark Roddy said. “It’s exciting to think about what else we can do.”