UC Davis Health physician runs to give back and connect

Marc Lenaerts ran more than usual in April, much more – as did many people in this COVID-19-era of isolation. He is a UC Davis clinical professor of neurology and director of outpatient neurology and his running is both a release and, oddly enough, a way to connect in a disconnected world.

Marc Lenaerts ran in sun and rain to raise money for COVID-19 funds.

But first, here’s his story from almost exactly one year ago.

Those are both understatements. He put off training because work was so busy. He ran daily, but minimal miles. Nothing that would prepare him for the 13.1-mile race.

His nutrition on race day morning was minimal, too: coffee and a banana. He has no excuse for that. Still, the first eight or nine miles went better than he expected.

“Then I hit the wall,” Lenaerts said. He laughed as he talked about it, but it was not at all funny then. “Anyone who has been in that position knows, it’s not a question of courage. You physically and mentally collapse. I kept thinking I wanted to crawl into a ditch.”

When he finished, he went to the ground, had cramps and vomited. He couldn’t tell race medics what city he was in. They wanted him to go to the hospital.

“I said no,” Lenaerts said. “They asked, ‘What do you do for a living?’ I had to say I’m a neurologist. It was not my best moment.”

His wife, Caroline Lenaerts, is a UC Davis Health nurse. She helped him recover. He decided he’d run the 2020 race well and began much better training. Then COVID-19 upset everything. So he ran for a larger goal. He ran to help support COVID patients, and discovered it also connected him to his world in ways he had not imagined.

Lenaerts is 57 and only started running when he was 40. “I grew up in Belgium and was absolutely not into sports,” he said. “But I reached an age and decided I needed to do something healthy. I really just fell in love with running.”

Four years ago, he decided to run every day and hasn’t missed one since, though many of his runs were just a mile or three, too short for half-marathon training. He began to pick up the miles and ran a solid Urban Cow Half Marathon last October. He was excited to redeem himself at the 2020 Parkway Half scheduled for the last Saturday in April. Then, like so much else, COVID-19 changed that plan.

“In any perspective, a cancelled race is a very small thing,” Lenaerts said. “But I still had a sudden blank feeling. I decided, this is a tough time for many people, so I would keep training for a different reason, and I would try really hard.” 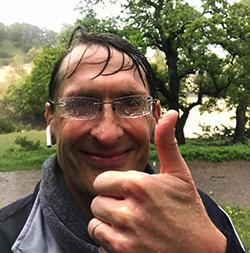 He began to raise money for the UC Davis Health COVID-19 funds by asking people to pledge any amount per mile that he ran in April.

“I was running about 3 miles most days and 6 on the weekends. I had to increase to many more miles than I’m used to,” he said. “I also wanted to show how we can do things we thought were too hard.”

He almost doubled the mileage and ran sometimes twice a day. Some weekend runs were 13 miles – the length of a half marathon. Not all went perfectly. There was the day he headed out and back to Folsom Lake. At exactly the halfway turnaround – the farthest he could be from home – it started to pour a firehose rain.

As he ran more, inspirations for him began to grow. He thought often of a teenage friend in Belgium named Stephane – a good athlete who was 16 when he fell in a gym and landed on his neck.

“He never moved a limb again,” Lenaerts said. “I visited him many times over the years and he was always in a good mood, always so positive. There are many times now when I think how Stephane would love to be in my legs running. So, I run more and I run for him.”

There are others who end up along for the run with Lenaerts, too – in a way. “I’m inspired by our COVID-19 patients and by the people I hold dear,” he said. “I think about them often, and I feel very connected to them. Sometimes I come home and feel as if they ran with me.”

Lenaerts also gets a lift from the new social-distancing phenomena of people waving and saying hi to everyone they pass. To him, it is life affirming.

“You see people running, biking, walking as families, doing all these healthy things,” he said. “We’re all really mindful of each other now. It is some good that has come out of this COVID-19 horror. We’re bonding in a different way, and maybe even a more meaningful way because we see the humanity in each other. We see how much we share.”

So how did this running quest turn out? Lenaerts ran 52 times in April and totaled 226.7 miles, just about 53 miles per week. To make sure his total was substantial enough, he ran three times on April 30, the last one a 10-miler in the dark.

And what will his May mileage look like? That got a laugh. “I think I’ll cut back a little,” he said.