Leonard “Larry” Hjelmeland, professor emeritus of ophthalmology and former chair of the Department of Biological Chemistry, died July 12, 2021, at the age of 73. He was at home with his wife, Mary Kay, and daughter, Anna, when he succumbed to complications of diabetes.

Hjelmeland was born in 1948 in Atascadero, California. He graduated from Stanford in 1971 with a degree in mathematics and chemistry. He published his first paper as an undergraduate, an article in Discrete Mathematics, entitled “Constructive graph labeling using double cosets.” He used to joke that this was the last time his name and the word “discrete” appeared on the same page.

Hjelmeland entered the Ph.D. program in biophysical chemistry at Stanford in 1971. His main area of study was the quantum chemistry of polycyclic aromatic hydrocarbons, but he continued to work in math and computer science, participating in the first forays into artificial intelligence. He received his Ph.D. in 1976.

In 1977, Hjelmeland moved to the National Institute of Child Health and Human Development (NICHD) at the National Institutes of Health in Bethesda, Maryland, where he was a staff fellow. At this time, the field of protein electrophoresis was undergoing a renaissance but was plagued by the problem of isolating insoluble membrane proteins while retaining functionality.

Hjelmeland brought his chemistry training to bear, working to develop detergents that could achieve this goal. While he published many manuscripts during this period at the NICHD, a highlight was his synthesis and patenting of a zwitterionic, non-denaturing detergent, referred to as CHAPS, which became very widely used in the community of cell biologists and biochemists. This achievement earned him the Inventor’s Award from the NIH.

In 1982 Hjelmeland moved to the National Eye Institute where he began work on growth factors and their role in a variety of ocular processes such as cell migration, differentiation, wound repair, and neovascularization, a theme that would characterize his work until his retirement.

John Keltner, M.D., former chair of the UC Davis Department of Ophthalmology, recruited Hjelmeland to the UC Davis faculty in 1986. Hjelmeland went on to procure decades of funding from the National Eye Institute and private foundations. He built a laboratory that was the training ground for numerous Ph.D. students who went on to careers in academia, medicine, industry and foundations. He also mentored many ophthalmologists to careers as clinician-scientists at major academic medical centers. These included scholars from Japan and Switzerland. 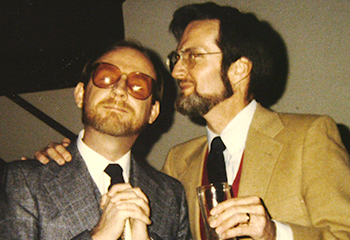 Hjelmeland eventually contributed 113 manuscripts to scholarly literature, advancing knowledge across a wide range of disciplines and establishing himself as a highly respected scientist known internationally for his work. Through his work and his mentoring, he had a major impact in vision research, advancing knowledge and training the next generation of scientists.

Notably, the publication in which he described the development of a human retinal pigmented epithelial cell line, called “ARPE 19,” remains the most-cited work in the history of the journal Experimental Eye Research. This cell line enabled an enormous number of valuable advances in the study of the retinal pigment epithelium and is now being used by pharmaceutical companies for the development of therapeutic approaches to treating ocular disease and producing protein pharmacologics.

In addition to his bench research, Hjelmeland contributed at many key levels, both to the campus and to the national and international community of vision research. At UC Davis, Hjelmeland served as the chair of the Department of Biological Chemistry, acting associate dean for research in the School of Medicine, and as special assistant to the provost, where he chaired the building committee for the Genome and Biomedical Sciences Facility. He served on the editorial boards of major journals, as a consultant to industry partners, and as a member of NIH study sections, to name but a few on a long list of activities. 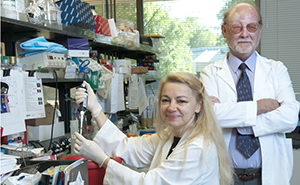 Hjelmeland’s career success was stellar by any measure, but it is particularly compelling because of the obstacles he had to overcome. As a teenager, he was diagnosed with insulin-dependent diabetes and ultimately lost his sight to it while working at the National Eye Institute in the early 1980s.

To overcome this, Hjelmeland was at the leading edge of machine-human interfacing, consulting with companies that developed talking computers and later smartphones. When Hjelmeland’s kidneys began to fail, he was kept alive by dialysis until he received a transplant from his sister. While waiting for the transplant, he developed prostate cancer, which delayed the transplant and extended his time on dialysis. He also dealt with several serious squamous cell carcinomas and two incidents of sepsis, one as a result of surgery to correct a broken hip. Despite these life-threatening events, Hjelmeland maintained an admirable equanimity and an awesome sense of humor.

For those who knew Hjelmeland for decades, it was remarkable never to have heard him complain; it just wasn’t in his nature. That he succeeded in the face of such obstacles defies description. He managed to meet every new challenge he faced. He was a man of exceptional empathy for others, and his resilience and perseverance in the face of innumerable setbacks inspired and motivated everyone who knew him.

Hjelmeland’s amazing intellect, seemingly unlimited memory, and broad knowledge never ceased to amaze. There seemed to be no area in which he was not deeply knowledgeable and well-read, from theology and philosophy to quantum mechanics, and from Pink Floyd to Persian poetry.

When queried by his peers about where he found the strength to keep pushing, he attributed it to his desire to be the best husband, father and provider to his wife, Mary Kay, and daughter, Anna. In that, he achieved perhaps his greatest success.

Hjelmeland made a huge impact, both scientific and personal, and will be greatly missed.

Memorial gifts may be made online to the Larry and Mary Kay Hjelmeland Fund for Basic Research in Ophthalmology fund. Contact Erin Bauer at ejbauer@ucdavis.edu for additional ways to contribute.