Four UC Davis scientists and clinicians have received grants totaling $8.8 million from the California Department of Public Health to study the role of racial disparities, diabetes, diet and infection in Alzheimer’s disease as part of a $21 million package of 11 Alzheimer’s research grants statewide.

“As our population ages, devastating disorders such as Alzheimer’s disease and other causes of dementia are increasingly common,” said Charles DeCarli, professor in the Department of Neurology and director of the UC Davis Alzheimer’s Disease Center.  “Not only do these diseases have severe consequences for those affected, but they have substantial added burden to their caregivers.”

DeCarli said he was honored to support the proposals, which include a clinical trial to reduce dementia risk through an exercise intervention and research that endeavors to understand the basic mechanisms of disease that may reveal novel avenues of treatment.

“We are excited to see new scientists entering the field of dementia research and we hope to sustain their efforts to find a cure for this devastating disease,” he said.

The largest grant, $4.9 million over five years, was awarded to David K. Johnson, associate professor in the Department of Neurology and director of the UC Davis Alzheimer’s Disease Center in the East Bay. His project will address what he calls an epidemic among older African Americans who are at the greatest risk for cognitive decline and development of Alzheimer’s disease, most likely due to variations in lifestyle and health, including a higher incidence of type 2 diabetes.

The funds will help expand the clinical services of the East Bay center to include delivery and testing of a lifestyle intervention – diet, exercise and a combination of both – to treat older adults with strong risk factors for type 2 diabetes and associated cognitive decline.

“We are looking at fitness versus diet and seeing if one is better than the other for specific people,” Johnson said. “There are reasons to think that blacks and whites might respond differently to the different parts of the diabetes program. Finding the answers would allow us to tailor interventions to meet the specific needs of our patients better.”

Looking at the gut for Alzheimer's disease treatment targets

Yu-Jui Yvonne Wan, vice chair for research in the Department of Pathology and Laboratory Medicine, received $2.7 million over five years to examine the role of bile acid receptors, which are important for digestion and fat absorption, in regulating memory and neuroplasticity – the ability of the neurons to compensate for injury and disease.

Noting that obesity in aging exacerbates brain inflammation and cognition, Wan theorizes that bile acid receptors are treatment targets for memory loss that is caused by diet.

“This notion is supported by the finding that bile acid receptors and signal regulation of these receptors are reduced in obese mice fed a Western diet, in Alzheimer’s disease animal models, and in Alzheimer’s disease patients’ brains,” she said. “Conversely, bile acid-regulated pathways are reactivated and neuroplasticity is restored in the Western diet-fed mice that get dietary fermentable fiber supplementation.”

Wan also will study the role of diet and gut microbes on neuroplasticity. She hopes the findings will have an impact on novel pharmacological strategies and dietary interventions including probiotics for improving cognition.

Can infection and brain injury play a role in Alzheimer's disease?

Injury to myelin, the insulating layer of the neuron connections in the brain, has long been observed in the Alzheimer’s disease brain, although its exact cause is unknown. There are high concentrations of autoantibodies against myelin proteins in blood of people with Alzheimer’s disease. In imaging studies, the volume of white matter hyperintensities (WMH), which indicate myelin degradation, predicts the rate and severity of cognitive decline.

“We hope to learn more about the relationship between infectious components, like LPS, and how they can initiate inflammation in the body leading to damaged myelin, oligodendrocytes, and oligodendrocyte progenitor cells,” she said. “These findings can help us devise new strategies in Alzheimer’s disease and WMH diagnosis, and update treatment and prevention such as LPS blood testing, inhibiting the LPS receptor in blood and brain, and/or immunization against LPS.”

Finding the underpinnings of diabetes and Alzheimer's disease risk

The fourth grant award, $520,000 over three years, was made to Thomas Jue, a professor in the Department of Biochemistry and Molecular Medicine. Jue and colleagues will investigate the biochemical mechanism underlying the linkage between type 2 diabetes and the increased risk of Alzheimer’s disease. They will use biochemical assays and novel nuclear magnetic resonance methods to interrogate the altered brain bioenergetics and metabolism.

The Alzheimer's Disease Program, administered by the California Department of Public Health, is solely dependent on donations from California taxpayers on their State income tax forms. 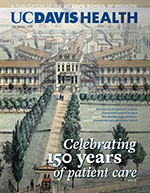