A UC Davis School of Medicine ceremony unlike any other allowed graduates to participate in commencement from their homes, surrounded by friends and family

The first UC Davis School of Medicine class to graduate during a global pandemic opened its commencement ceremony Friday with the traditional sound of bagpipes – then transitioned to the technology of our so-called new normal.

“There’s no question that everyone, but especially graduates, will remember this remarkable and also very unusual day,” Vice Dean Mark Servis said from the podium, in a slightly muffled voice while wearing a dark cloth face mask with a UC Davis Health logo. “This is the first time in the 50-year history of our school that we have had a virtual commencement ceremony.” 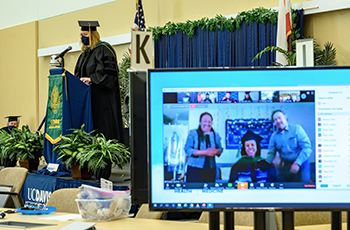 Then Servis added this disclaimer: “Due to the unique nature of the event, I want to warn all of you in advance that there could be technical or other glitches, and if and when they occur, we will improvise and go forward.”

But aside from a student or two who forgot to unmute their Zoom video call when it came time to say a few words while being hooded by loved ones at their home, the university successfully and memorably conferred 114 Doctor of Medicine degrees largely without a hitch.

The ceremony originated in the largest lecture hall of Betty Irene Moore Hall in Sacramento, where the stage party was based, and was watched by more than 1,000 around the world.

UC Davis Chancellor Gary S. May praised students for facing “some of the most trying times our nation has ever known,” due to the novel coronavirus, which has sickened hundreds of thousands and shuttered schools and businesses around the globe. “Never before has the importance of your role been so elevated in the eyes of the world.”

Dean Allison Brashear, experiencing her first graduation at the School of Medicine since coming to UC Davis last July, also noted the “unprecedented time” the students encountered during their final year of medical school.

“There is no more important time to be entering medicine. We know you will make a difference, some at the bedside, some at the lab, and some will bridge the two,” she said.

Student speaker Tyler Carcamo, a soon-to-be surgery resident at UC Davis, expressed gratitude for the village of friends and family who raised him in Belize and Bakersfield, and encouraged graduates to thank their own villages for supporting them through medical school.

He also implored his classmates to continue to venture though uncharted waters, carry a compassionate bond with patients, have cultural humility, advocate for the most vulnerable and be visionary leaders for the future of medicine.

Last year, commencement was held at Mondavi Center in Davis, which, as usual, was packed to its 1,800-person capacity. This year, the Zoom graduation, which was simultaneously broadcast on Facebook Live, peaked at about 1,200 users watching -- which doesn’t tally the many more people who joined the dozens and dozens of viewing parties. 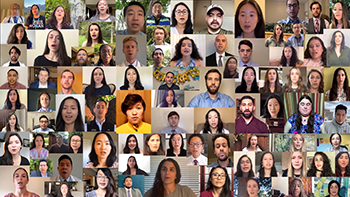 The Class of 2020 recites the Physician’s Oath, which they submitted by video, for commencement

Virtual commencement also provided a quick glimpse into one of the medical school’s greatest strengths – diversity – as it opened a door into people’s homes where students were hooded by generations of family members, from young children to grandparents, and often speaking in different languages.

In many homes, multiple family members hooded the new doctor, while in others, the student on camera placed the hood over his or her own shoulders.

Here’s a sample of what viewers saw and heard in snippets that lasted fewer than 10 seconds:

Mayra Carrillo, with a small child on screen, thanked her parents, husband, “and everyone else,” then blew a kiss into the camera.

Ernestine Chaco, from her home in New Mexico, appeared in front of a background completely covered with photos of people important in her life.

Estelle Dolan’s mom and wife were so excited during the hooding that they accidentally bumped the cap off Dolan’s head.

Young Il Kang greeted his parents in the Philippines, where it was 3 a.m.

Christina Monroy, sitting near a Virgin of Guadalupe banner, declared she couldn’t have gone through medical school without God’s help.

Tyree Davie’s party included a celebration so loud, it came over as distorted audio.

Colton Soudan, with a U.S. flag covering a plain white wall, thanked his hometown, Oroville, about 90 minutes north of Sacramento

Someone on Walid Sherif’s microphone was heard shouting, “My brother’s a doctor, wooooo!”

After students were hooded, the commencement organizers played a recorded compilation video of nearly 90 graduates reciting the physician’s oath. Normally, the oath would be said simultaneously on stage, but for virtual graduation, students sent in videos of themselves, in English and 12 other languages.

At the end of the program, Associate Dean for Admissions Mark Henderson asked students to move their tassel from right to left, to signify they were graduates. “Now,” he said, “it’s official.”