Daughter donates kidney to her role model, her dad, on Father’s Day

When Jazlyn Estrella thinks of her father, she envisions him in the garage with his tools, creating something.

Jazlyn Estrella’s earliest memories of her father, Ruther, involve him building things, such as a Star Wars costume.

“He’s always working on something,” she said of her father, Ruther Estrella. “He’s so artistic and, if he puts his mind to it, he can build anything.”

She recalls a life-size replica of the R2-D2 droid he fabricated when she was young, along with several Star Wars costumes. Whenever Father’s Day arrived, she bought him tools.

“Tools for whatever project he was working on, or a gift card to a store where he could buy more tools,” she laughed.

Over the years his health deteriorated and for Father’s Day 2021, Jazlyn Estrella gave her dad something you can’t buy.

The 21-year-old donated one of her kidneys to him. The UC Davis Health transplant team made it possible.

It was the best gift she could ever give. The hours he once spent in the garage had become hours connected to a dialysis machine. At the age of 47, the man who had been her role model since she was a young girl, now fought aggressive kidney disease and faced a bleak future.

Ruther Estrella’s kidney disease worsened in 2019. When his daughter drove up from the Bay Area to visit him in Sacramento, she saw how sick he had become and how complicated dialysis can be.

“The first thing she did, she hugged me and started crying,” Ruther Estrella recalled. “She sat next to me and said, ‘I don’t like to see you like this, dad.’  But I didn’t expect anything from her.” 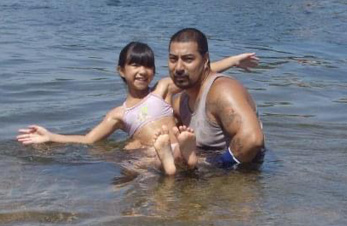 Jazlyn Estrella donated her kidney to her father, Ruther, because he is her role model and she didn’t want him to miss her life milestones.

For Jazlyn Estrella, seeing her father tethered to the machine sparked her strong will and determination to help however she could.

“No person’s opinion could change my mind on it,” she said. “I knew he couldn’t be strong with a failing kidney. I felt like I was going to lose my dad.”

Ruther Estrella had been expecting a moment like this for 16 years.

Born in the Philippines, he and his family came to the U.S. when he was seven, and Estrella was diagnosed with an autoimmune kidney disease when he was 13. Doctors told him then that they would keep an eye on his kidneys, because they were not well. Years later, in 1998, when his then-wife was pregnant with Jazlyn Estrella, he went in for routine check-up.

“After a simple blood check, they came out with a wheelchair and rushed me to emergency dialysis,” he remembered.

He would remain on dialysis awaiting a transplant for five years. In 2003, he received a cadaver kidney. The doctors told him it might last for eight years. While he doubled those expectations, the inevitable scenario returned.

“I want to save his life”

“When I saw him, I made the decision that I want to do something for my dad,” said Jazlyn Estrella. “If I can do it, I want to save his life.” 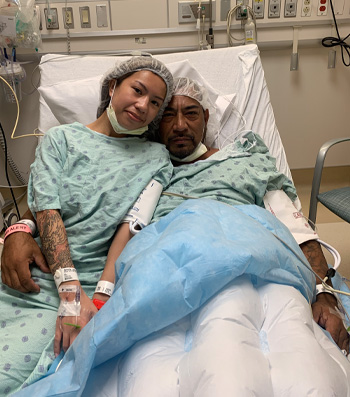 Jazlyn and her dad Ruther Estrella recover at UC Davis Medical Center after she donated a kidney to him the day after Father’s Day.

After learning they were a perfect match, Jazlyn Estrella began her living donor journey. Meanwhile, Ruther Estrella’s fiancée, Grace Cantiller, served as his number-one supporter and full-time caregiver for his home dialysis. His days were restricted, but with his fiancée and daughter fighting with him, he never gave up hope.

“We didn’t even realize that the 20th was Father’s Day. I was laughing and thought, what a great gift. I need to take really good care of this kidney,” Ruther Estrella said.

“I thought this was going to be the best gift for him. And I didn’t have to shop for him! It just added more sentimental value to it,” Jazlyn Estrella added.

Not only sentimental value, but also quality of life because this time around, the kidney came from a living donor.

“Compared with dialysis therapy, living donor kidney transplant not only improves the quality of life, but also prolongs life expectancy,” explained Junichiro Sageshima, transplant surgeon and director of the UC Davis Living Donor Transplant Program. "It is truly a gift of life.”

“It just feels like the ball and chain has been cut. Time is not limited. I can go wherever I want because my daughter gave me a second chance at life.”

Living is exactly what the Estrellas plan to do. Before he got sick and before COVID-19, Ruther Estrella and Grace Cantiller planned to return to his birthplace and get married. Now, they’ll make that trip with Jazlyn Estrella and its significance will mean so much more.

“It just feels like the ball and chain has been cut. Time is not limited,” Ruther Estrella said. “I can go wherever I want because my daughter gave me a second chance at life.”

For Jazlyn Estrella, it also affords her dad the opportunity to be around for her future milestone moments.

“I’ve known people who get married and their dad isn’t there,” she explained. “That would break my heart if he weren’t there for my wedding or to be a grandfather to my kids. The whole process was worth it because it saved a life.”