When a high-profile team of health and education leaders examined how California’s future workforce can better meet the state’s evolving health needs, it pointed to a thriving program at UC Davis School of Medicine.

Earlier this year, leaders of the California Future Health Workforce Commission reported that the University of California’s PRIME programs at six campuses are successfully boosting the number of physicians from underrepresented groups and placing them in communities of need, which is critical for achieving health equity and access to care.

Indeed, more than 150 UC Davis School of Medicine PRIME graduates over the past decade are transforming the physician workforce in medically underserved cities and towns between Bakersfield and the Oregon border, and throughout the Western United States.

Students selected for PRIME (short for, Programs in Medical Education), choose to study in one of four medical education pathways that include rotations in hospitals and clinics unique to a geographic area or primary care setting.

PRIME is a popular program for students with deep connections to vulnerable communities — and it’s making a difference.

Preparing the workforce for diverse patients

“Although we still have a way to go to achieve health equity, the School of Medicine is enormously proud of the emphasis we place on PRIME and I’m grateful for all the students, faculty and staff that are dedicated to improving the health of all communities,” she added.

About a quarter of UC Davis’ approximately 450 medical students are enrolled in a PRIME pathway; nearly all are training for careers in primary care or other needed specialties such as obstetrics/gynecology, general surgery, and psychiatry.

PRIME was initially conceived by the University of California Office of the President and started at UC Irvine in 2004. By 2008, each UC medical school had its own program, tailored to meet the needs of the populations that campuses were committed to serving. 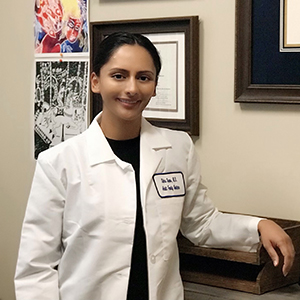 Sidra Seuss is a 2015 UC Davis PRIME graduate and internal medicine physician at Kaiser Permanente Medical Offices in Stockton, not far from where she was raised.

PRIME students must first be admitted into the UC Davis School of Medicine, then go through a secondary application process for a specific track.

The program, which prioritizes care to underserved communities, such as the Central Valley or rural Northern California, often attracts students who were raised in those regions. And when students are from a particular area, or do their residency there, they are more likely to eventually practice medicine in the same place, thus filling critical workforce shortages.

“I was raised in Modesto and my husband is from Lodi; there was no doubt in our minds that we were going to come back eventually,” said Sidra Seuss, a 2015 San Joaquin Valley PRIME graduate in her first year of practice as an internal medicine physician at Kaiser Permanente Stockton Medical Offices.

The PRIME program is critical, she said, for supporting and encouraging medical students to work in communities that historically have suffered severe physician shortages.

Seuss added that San Joaquin Valley PRIME’s focus on community health made a “huge” impact in “shaping me into the type of doctor I always wanted to be.”

“I do believe there’s a relationship between the ranking and the growth of our PRIME program,” said Tonya Fancher, associate dean for Workforce Innovation and Community Engagement and director of the Center for a Diverse Healthcare Workforce.

Another reason PRIME has been successful, Fancher said, is because students are paired with faculty members with similar backgrounds, interests and desire to serve the underserved.

PRIME also tends to draw students from socioeconomically disadvantaged backgrounds and communities underrepresented in medicine. Many PRIME students started higher education in community colleges or grew up in households where English was a second language, which the school’s admissions office counts as valuable lived experience that will enhance the next generation of doctors.

Future plans for UC Davis PRIME include strengthening outreach to regions where there continues to be a mismatch between the existing medical workforce and the state’s increasingly diverse population, Fancher said.

Mark Henderson, associate dean for admissions, said that over the past 12 years, PRIME has been a vital pathway for the UC Davis School of Medicine to help transform the physician workforce.

“Our PRIME program has firmly established the school’s national reputation for training students to care for the underserved and achieve the social mission of medicine,” he said. “With the continued success of our incredibly diverse graduates, the future of medicine seems bright indeed.”