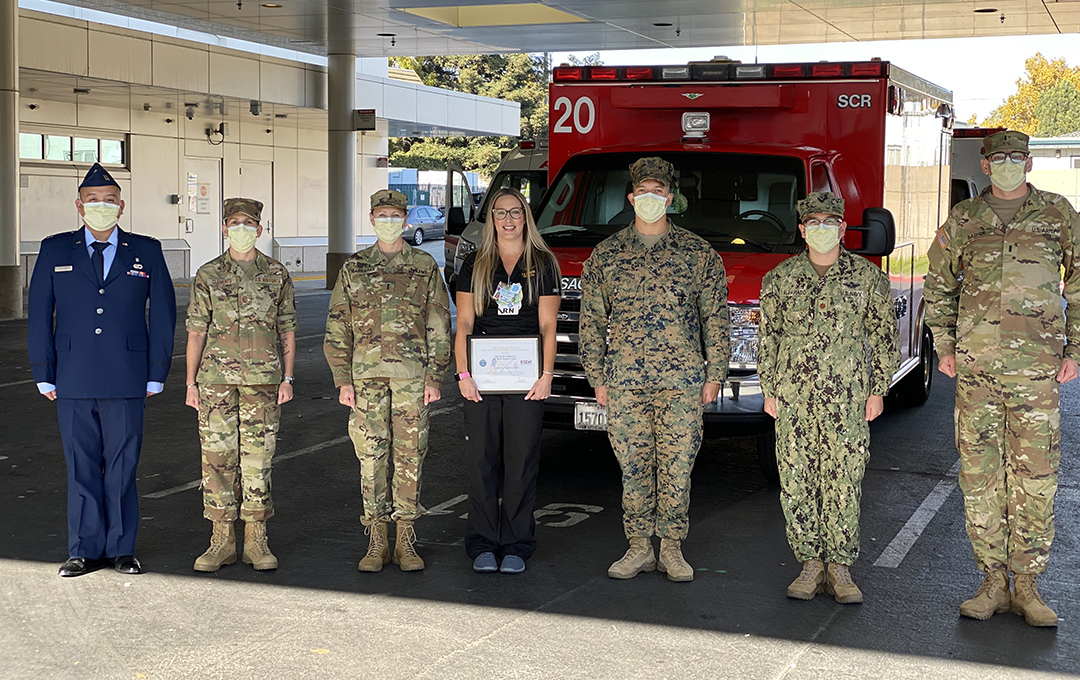 (SACRAMENTO) — In the dark days of April, when assistant nurse manager Claudio Alvarado was providing first-hand accounts of the situation in New York to his UC Davis Health colleagues, clinical nurse leader Alyssa Johnson was horrified and moved by what she heard.

Alvarado, a lieutenant commander in the U.S. Navy Reserves who was mobilized to Brooklyn for a month and a half, wrote that health care workers were wearing down and breaking down from caring for waves of gravely ill COVID patients – with limited staff, very little PPE and makeshift cleaning supplies. 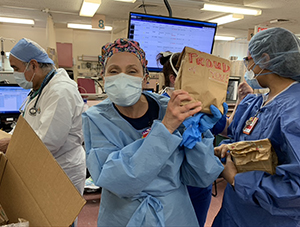 Health care workers in New York were grateful for the care packages.

At that time, Johnson recalled, the pandemic had not yet hit full force in the Sacramento region, and she felt she had to do something to help their counterparts on the East Coast. Johnson, who co-chairs the ED’s own Peer Support Team with Alex DePew, knows the importance of keeping staff healthy in mind, spirit and body.

“I thought: ‘We have the time, we have the effort and we have the ability to help out our friends and colleagues,’” she explained.

So Johnson rallied her Emergency Department co-workers to put together care packages for the workers on the front lines. Many donated money, others contributed products from their businesses, some scrounged up rare hand sanitizer and wipes from their homes, and a few had their children write cards of encouragement.

All told, more than 200 people in the ED – nurses, doctors, techs, social workers and others – contributed to the effort. And that’s why, when Johnson recently received an award from the U.S. Department of Defense for supporting the Guard and Reserves fighting the coronavirus, she was quick to credit the entire team for the “amazing award.” 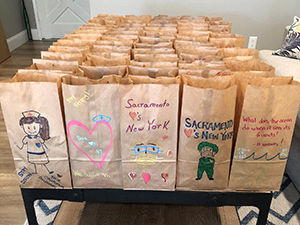 Care bags were filled with treats and self-care items to lift the spirits of front-line workers.

“I wish my name wasn’t necessarily on it,” Johnson said, “because it’s really UC Davis employees and our staff that stepped up and donated to make it all happen – I just happened to be the shipping person.”

That was no small feat, however. On multiple shopping trips (where retailers like Costco and Big Lots generously offered discounts and waived quantity limits when they heard about her cause), Johnson loaded her cart with healthy snacks, electrolyte drink mixes, mints, chewing gum, lip balm and self-care items for raw hands, feet and faces.

Johnson had friends and family assemble and decorate individual care bags, some of which had quippy “dad jokes” to bring a smile to the recipients. And then everything was packed into three large suitcases (which went with physicians flying to New York) – as well as 13 heavily laden moving boxes, shipped directly to Alvarado.

He gave the care bags to Emergency Department staff at Brooklyn’s Woodhull Medical Center, the level II county hospital where he was working. Alvarado also distributed items to Navy, Army and Air Force personnel who were pitching in across the boroughs of New York and the Javits Center. 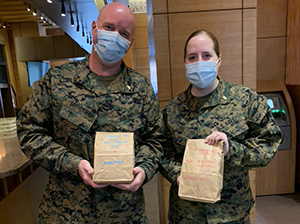 “I would have never expected that Alyssa took my reports back to UC Davis Health as a call to arms,” said Alvarado, who nominated Johnson for the Department of Defense award. “She coordinated, packed, and shipped so many boxes of care items that truly touched service members and our civilian counterparts – she is the embodiment of a true patriot.”

Johnson – whose parents were both officers in the Air Force – said she was happy she could help the armed forces and her colleagues in the medical field during the early days of the pandemic. And she remains inspired by the immense generosity of her teammates in the ED.

“It’s not just me – the entire staff came together and they really helped out,” Johnson said. “Everyone donated whatever they could.”