The preliminary plan calls for a new 16-story hospital building and five-story pavilion that would replace existing patient care facilities that must be demolished or decommissioned to meet state earthquake safety mandates.

Planning and design for the $3.75 billion project is expected to take three years, with early construction efforts starting in late 2021 and detailed design phases continuing through 2023.

UC Davis plans to solicit extensive community input on the planned California Tower, including surrounding open space areas and opportunities for neighborhood connectivity with the campus, through a university-led outreach process modeled on the one the City of Sacramento and UC Davis are jointly conducting for Aggie Square, the innovation district that the university is planning for the Sacramento campus in partnership with the City. 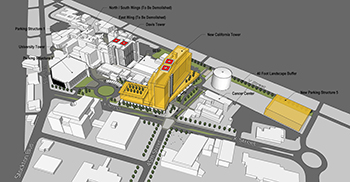 The ‘California Tower’ project is part of UC Davis Health’s mission as an anchor institution to serve the community and region. Click for larger image. (PDF)

For the Aggie Square project, UC Davis and developer Wexford Science + Technology are in the final stages of negotiating an extensive agreement detailing the Community Benefits Partnership with the City of Sacramento that will spell out the ways that construction and operation of the $1.1 billion district will help people in the nearby communities. The agreement will outline the commitments of UC Davis, Wexford and the City to provide jobs, job training, affordable housing, better transportation options and youth education. UC Davis plans to conduct similar outreach as part of the planning for the new addition, including the creation of an advisory committee comprised of neighborhood representatives.

“We will build on the partnerships emerging at Aggie Square with our city leadership and our neighbors,” said Hendry Ton, UC Davis associate vice chancellor for health equity, diversity and inclusion. “We’re re-envisioning our role as a traditional health provider to one that encompasses the full context of health equity.”

When completed, the expanded hospital will contain 700 licensed beds, up from 625 today. But the square footage of the hospital will nearly double to accommodate a greater number of private rooms, which are known to produce better outcomes in terms of recovery and healing, and to reduce infection transmission. A greater number of rooms would be acuity-adaptable, meaning they are designed so they can be used as ICU rooms should a surge in critical cases arise, as during the current pandemic.

“We’re re-envisioning our role as a traditional health provider to one that encompasses the full context of health equity.”

“While there is an overall reduction in the need for hospital beds across the region, we are uniquely planning for more beds,” said David Lubarsky, CEO of UC Davis Health. “In the not-too-distant future, fewer people per capita will need to be hospitalized, due to evolving health technologies, same-day surgeries, telehealth visits and being able to remotely monitor a patient’s vital signs. Low acuity care in the inpatient arena will virtually disappear over the next decade. However, those individuals who do require hospitalization will likely require longer stays for complex surgeries or other critical care services, such as trauma care, that we provide. We will continue to work with community hospital partners to increase the level and amount of care they provide locally while we concentrate on patients that require advanced technologies and coordinated subspecialists available in an academic center, and which leads to the superior outcomes we deliver in those cases.”

A key highlight of the building project will be single-patient rooms. Private rooms, rather than the traditional two-bed design, are known to enhance recovery and healing, and help reduce infection transmission. The new tower will have approximately 400 private rooms for patients.

The new rooms also will be what planners call “acuity adaptable.” It means that all rooms are designed as ICU-capable rooms with air isolation so that they can be used to care for patients of any acuity level, should a surge in critical care cases arise, such as during a pandemic, massive wildfire or radiation leak. In addition, rooms will be embedded with, and designed for, the latest technologies, easily enabling rooms to accommodate medical and surgery patients if needed. The adaptability of the patient rooms to meet a critical care surge means the new facilities – with the potential for creating 450 ICU rooms – will be positioned to meet regional needs for the next 50 years.

Meeting the needs of the most vulnerable patients

What’s crucial about helping to meet the region’s hospitalization needs for the next five decades is that UC Davis Health has long provided care to the most vulnerable populations and underserved communities, especially when it comes to providing specialty, in-patient hospital services. Its current inpatient work is 41% Medi-Cal. The core of our everyday mission is to increase the health of the community overall. That includes ensuring a robust health care safety net for historically marginalized populations.

Hospital care in the same location since 1871

The new tower facility will be located on existing parking areas and fit within the medical center’s planned footprint. It will be built near the corner of 45th and X streets. It will include two additional helipads for emergency cases and patient transfers, which will add to the medical center’s two existing landing pads. Part of the need for the additional facilities is the forced closure and demolition of older portions of the UC Davis Medical Center, which do not meet the state’s 2020 and 2030 seismic safety requirements. Demolition of the 1950s-era north and south hospital wing, whose nine-story profiles can be seen from Stockton Boulevard, is slated to be completed in 2030.

The California Tower project will provide hundreds of union-wage construction jobs and ultimately create ongoing employment for people in an area that will benefit from having an anchor institution in it. Along with improving UC Davis’s workforce development programs and partnering with other businesses and community groups, this project is expected to create hundreds of prevailing wage construction jobs and thousands of new health care positions for the local community around the health system campus.

The environmental review process for the tower starts this week, with documents going to the UC Board of Regents for approval later this year. While some initial drawings have been created for illustration purposes, design work for the new building also begins this month in what is expected to be a multi-year planning process. UC Davis Health will be working with the local government officials and community groups to host community forums.  Visit  https://environmentalplanning.ucdavis.edu/california-tower for more information.

Leveraging economic power to improve health for all

Anchor Institutions are place-based, mission-driven entities such as universities and hospitals like the UC Davis Medical Center, that represent stable, long-lasting centers of employment and services within the fabric of a city. These anchor institutions can leverage economic power alongside human and intellectual resources to improve the long-term health and social welfare of surrounding communities.

With the project creating hundreds of construction jobs, as well as tapping local vendors and suppliers for materials, California Tower will bring an economic boost to the Sacramento area. Once completed, its state-of-the-art facilities on the Stockton Boulevard corridor will permanently employ clinical professionals and skilled employees alike. New programs for job training for the local community is planned as part of this construction – UC Davis Health has already added 1,500 mostly union jobs in just the last three years and is committed to making sure those employment benefits clearly extend to local applicants. The new jobs and local investment can help address historic impediments caused by poverty and discrimination, both of which are associated with reduced access to safe environments and good health.

“We recognize that significant disparities and inequities in health outcomes exist for Sacramento’s underserved communities,” Lubarsky said. “The new California Tower will clearly benefit hospital patients. But it also can help address the social determinants of health, inequities that have for far too long placed residents and families living in the neighborhoods near UC Davis Medical Center at higher risk of poor health and fewer opportunities for improving their quality of life.  Uplifting the economic trajectory of the people in the communities around us through this building project and its subsequent operation will provide resources necessary for those currently underserved to achieve better health”