VIDEO: From patient to professional

Jason Ramos walks the halls of the oncology floor of UC Davis Medical Center with new confidence and a new perspective. He’s a nursing student in the final quarter of the Master’s Entry Program in Nursing at the Betty Irene Moore School of Nursing at UC Davis. But this isn’t his first time in the area of the hospital known as Davis 8.

In 2005, when he was 25, Ramos received a devastating diagnosis of large B-cell lymphoma.

Yet Ramos became a patient and entered the oncology unit to begin chemotherapy. Upon admission, he met Connie Rogers, a registered nurse four years into her career.

“He was still smiling and joking, like he was coming in to have dinner or go to a movie,” Rogers recalls. “It was his very first dose. I hung a bag of chemo and within 15 minutes he wasn’t breathing.”

A tragic turn of events

A severe allergic reaction to the drug sent Ramos into anaphylactic shock. Rogers called the emergency code and summoned a team. Physicians performed a tracheostomy on the spot to save Ramos’ life. He spent the next eight-and-a-half months in the hospital and developed a bond with the nurse who spent nearly every day with him. 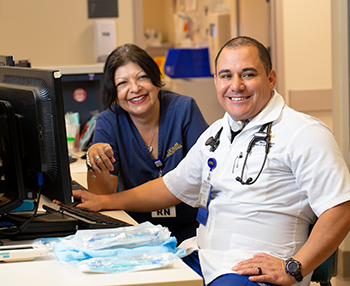 After two years of recovery outside of the hospital, Ramos reassessed his future. Working in the warehouse industry no longer fulfilled him. He set his sights on a career in health care.

“In the beginning I didn’t truly know where I wanted to go, I just knew I wanted to be in health care somewhere,” Ramos explains. “I wanted to give back to the industry that saved my life.”

He buckled down, received a bachelor’s degree, completed the prerequisite courses needed for nursing school and applied to UC Davis. When the time came to choose an area of focus for his capstone project, he requested oncology at UC Davis Health under the mentorship of the nurse who saved his life.

“The charge nurse told me, ‘this guy specifically requested you.’ I thought it was odd, but I love teaching students, so I agreed,” Rogers says. “Then I get the email that says your preceptee’s name is Jason Ramos. And it took my breath away. I didn’t know where he was and the thought that he was becoming a nurse now, just blew me away.”

Ramos had an equally emotional reaction to his new partnership and his return to his home-away-from-home nearly a decade and a half earlier.

“The second that we paired up and started working together, it didn’t feel like someone new. It was Connie and Jason,” Ramos says. “For me to come back here 14 years later and help patients on the same floor that I was on, to walk into the same rooms where I was in for months — it’s pretty surreal.”

The experience confirms for Ramos that when he graduates in December — and then passes the national licensing examination for registered nurses — he wants to return to UC Davis Health to work with cancer and ear nose and throat patients and join the team that provided excellent care to him. 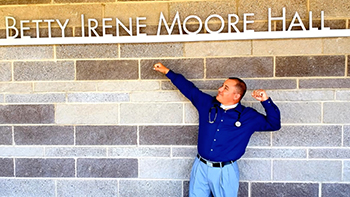 “There’s something about being on a teaching campus where another level of care is provided. I felt it as a patient and that’s what drove me to come back here,” says Ramos, who along with his 47 classmates, symbolically marked the transition from formal education to the nursing profession at a pinning ceremony on Dec. 12.

“I think that when you’re a patient here you learn to trust this place and you learn to feel a comfort here,” Rogers adds. “So, it would only make sense that if this is what you wanted to do with your life, this is where you would do it.”

Rogers says this precepting opportunity has brought her career full circle. She believes that the young man she nurtured back to health 14 years ago will make a phenomenal nurse in the future. For Ramos, the journey to fulfilling his dream is just beginning.