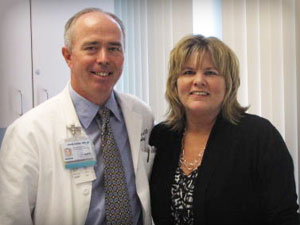 Mimi Petersen, shown above with vascular specialist John Laird, is thrilled to have a physician who understands her condition: "It is so nice to find a doctor who is interested and open to listening."

The Fibromuscular Dysplasia Society of America has recognized the UC Davis Vascular Center as an evaluation and treatment site for patients with fibromuscular dysplasia, an underdiagnosed and potentially serious vascular disease that alters arterial development and function.

"We are thrilled to include fibromuscular dysplasia patients in our clinic for evaluation and to partner with them on treatment options," said John Laird, medical director of the UC Davis Vascular Center. "Many of these patients have waited too long to see a specialty team with an interest in their specific condition, and we are pleased to extend our expertise and resources to them."

The society, which has similar collaborations with medical centers in the Midwest and the East, took this step with UC Davis to broaden access to care for fibromuscular dysplasia patients on the West Coast. The organization is based in Rocky River, Ohio.

"We continuously receive requests from patients for physicians who are skilled and knowledgeable about issues related to fibromuscular dysplasia, including a number of members in the West who have been traveling long distances for expert medical advice," said Pam Mace, executive director of the society. "It is nice to be able to link them with a center that is so clearly committed to serving patients."

Fibromuscular dysplasia occurs when the cellular growth of certain arteries — typically the carotid artery in the neck or arteries within the kidneys or brain — goes awry. The disorder is detected by advanced, highly detailed imaging technologies that can identify abnormal vascular structures, which appear as a thickened buildup of tissues inside artery walls or a series of lumps on the outside. As a result, normal blood flow is interrupted and patients are at greater risks for high blood pressure, strokes, arterial tears or kidney failure, depending on which arteries are affected.

About the UC Davis Vascular Center

The center's board-certified surgeons, clinicians and researchers utilize a comprehensive care and team-treatment approach that emphasizes prevention, early diagnosis and minimally invasive treatments. Through state-of-the-art technology and a strong continuity-of-care philosophy, patients are assured the best in both technical support and follow-up treatment.

Collaborations between the center's experts and UC Davis stem cell investigators are leading to therapies that generate new arteries and restore blood flow in diseased legs and arms, reducing the need for amputations. Additional information is available on the center's website.

Unfortunately, patients tend to experience symptoms for years before a diagnosis is made and adequate monitoring and interventions are initiated. Mimi Petersen, for instance, after more than two decades of treatment beginning in her late teens for high blood pressure, was finally diagnosed with fibromuscular dysplasia by a kidney specialist.

Petersen's experiences underscore that the condition is not well-understood across the medical community and not a national research priority. She has since joined the society in advancing awareness of and research support for the condition. At the same time, she began looking for a vascular specialist close to her home in Sebastopol, Calif. Her search led her to Laird, a national leader in vascular disease treatment who was luckily just a two-hour drive away.

According to Laird, treatment approaches for fibromuscular dysplasia differ, depending on how the condition affects individual patients.

"We can use traditional arterial disease approaches like angioplasty to open blockages and stents to repair arterial tears. We can also prescribe medications to reduce high blood pressure and stroke risk," said Laird. "But our very best hope for new treatments is to identify the genetic and molecular triggers for the disorder and disrupt those mechanisms before the disease process becomes advanced. We have a great team of basic and clinical scientists who are conducting leading-edge research in this area, including stem cell-based therapies."

To jump start national interest in research, Mace is working on expanding an existing but not yet widespread database of information about fibromuscular dysplasia patients, including symptoms, family diagnoses and ages of onset.

"This will give us a much clearer picture of prevalence," said Mace, a retired emergency medicine nurse and fibromuscular dysplasia patient who today devotes most of her time to the society. The database, she noted, could also eliminate common assumptions about the disorder, such as that it affects only women.

"The more comprehensive the database can be, the better our chances are of defining symptoms, identifying patients who are most vulnerable and tracking the natural history of the disease's progress," Mace said.

Laird, Mace and Petersen agree that prevalence of fibromuscular dysplasia in the general population is much higher than the commonly accepted rate of less than 1 percent, as the disease is underidentified due to lack of broad understanding of its symptom profiles.

According to Laird,  "This is something we can all work together to change, starting by making sure that primary-care physicians are aware that fibromuscular dysplasia should be considered a possibility for patients with consistent headaches or high blood pressure, especially among those under age 30."

Petersen, whose condition today is managed after having one kidney removed and receiving ongoing treatment for high blood pressure, is happy to have a physician who understands.

"For someone who struggled with the diagnosis and has seen a variety of physicians for 14 years, it is so nice to find a doctor who is interested and open to listening," Petersen said. "I really hope for the day when every patient who has any symptom of fibromuscular dysplasia is referred for a vascular workup."