When heart disease sneaks up 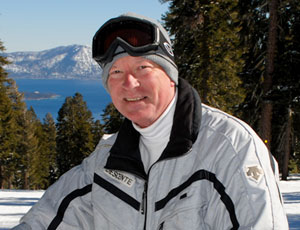 Richard Sprague has built a successful career helping people and organizations meet the challenges of change. He wrote his doctoral dissertation on effective grief therapy. As an ordained Methodist minister, he turned around churches in crisis. As a consultant of 30 years, he has helped companies deal with tough transitions like large-scale downsizing. Today, he helps nonprofit organizations create or transition their boards.

As good as he is at helping others, when his own heart disease began to set in he was, in his words, “the poster boy for heart ignorance.”

I lived my entire life believing I was in a protected class,” he said. “There is no record of heart disease in my family for four generations on both sides, or so I thought.”

On a ski slope one day, however, the signs became overwhelming.

“Halfway down the backside I had to stop,” he said. “It felt like 600 pounds of pressure was on my chest and I couldn’t breathe. I couldn’t believe this was happening to me.”

After regaining his breath, he slowly skied down the slope, drove home and went directly to his internist, who diagnosed high blood pressure but couldn’t detect the cause. He referred Sprague to Reginald Low, chief of cardiology at UC Davis, who performed an angiogram that revealed the culprit: an artery almost completely blocked in one place and three-quarters of the way there in another. Low used catheters with balloons on the tips to open the blockages, and then installed stents to help strengthen arterial tissues. He also prescribed medication to help control Sprague’s blood pressure.

“It felt like 600 pounds of pressure was on my chest and I couldn’t breathe. I couldn’t believe this was happening to me.”

Since then, the change consultant has made some changes of his own.

“Now I cook everything from scratch,” he said, to help reduce sodium and fat in his diet. He also checks his cholesterol and blood pressure regularly and spends more moments enjoying views of Lake Tahoe from the top of ski lifts and of sunsets in the valley from his home in El Dorado Hills.

“Whether it’s Sunday or not, watching the lake and the sunsets are church for me,” he said.

What has not changed is his love for skiing: “I actually ski harder and more aggressively than ever before.”

Sprague feels so much better since his procedure that he can now look back and recognize the subtle symptoms of heart disease.

“I remember walking to the gondola, really huffing and puffing and short of breath, and walking up three flights of stairs to a client’s office and not being able to talk when I finished,” he said. “That was unusual for me because I was not in bad shape. It just didn’t make sense.”

What is Sprague’s advice for those who think they are not at risk for heart disease?