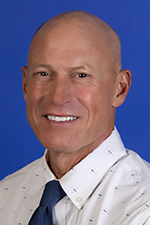 Nick Eversole has been at UC Davis Health for nine years where he serves as Assistant Vice Chancellor, Human Health Sciences and Chief of Staff to Vice Chancellor and CEO Dr. David Lubarsky. He oversees initiatives, projects, programs, recruitments and other priorities of interest to the Vice Chancellor/CEO.

Prior to moving to Northern California, Eversole served as the Assistant Dean of Undergraduate Education at the University of California, Irvine. In addition to fiscal and personnel oversight for the school, Eversole coordinated the efforts of a vast array of services and programs including Academic Testing, Campus-wide Honors, International Education, Classroom Technology, Undergraduate Research and Faculty Pedagogy.

Before joining UC Irvine, Eversole worked at California State University, Fullerton where he began as the Chief of Staff and Director, Budget & Administration in the Office of the Executive Vice President before becoming Assistant Vice President of Student Affairs. His career in higher education also includes eight years at UCLA, where he began in Business & Legal Programs before becoming Chief of Staff to the Dean of Extension, Continuing Education and Summer Session.

Eversole is from Ohio. He received his B.A. in Spanish from New College in Sarasota, Florida and his M.B.A. from UCLA. He lived abroad for nearly a dozen years, including undergraduate studies in Spain followed by two years of service as a U.S. Peace Corps volunteer in Africa, and then various positions with the U.S. and British governments in Portugal and Colombia.