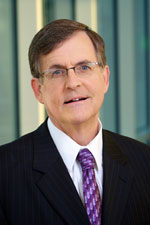 Thomas S. Nesbitt, M.D., M.P.H., is Emeritus Associate Vice Chancellor for Strategic Technologies and Alliances, and while serving actively in that role was responsible for advancing UC Davis Health’s excellence in clinical outreach and technology-enabled models of care. Nesbitt has worked closely with leaders throughout the state in developing partnerships with regional hospitals, clinics and centers to expand access to quality health care and create a statewide broadband telehealth network. He also helped ensure that faculty and staff excel at using innovative technologies to provide high-quality, state-of-the-art medical care.

Nesbitt also served as Interim Vice Chancellor for Human Health Sciences and Dean of the School of Medicine at UC Davis from June 2013 – February 2014, and again from spring 2017 – summer 2018.

Nesbitt continues to serve the university by co-leading the Healthy Aging in a Digital World Big Idea and contributing knowledge in his research interests as an emeritus faculty member.

Throughout his career, Nesbitt has focused his scholarship and leadership on addressing geographic health disparities, improving access to health care and developing the health-care workforce for California, the nation and the world. He is internationally known and highly regarded as a pioneer in using telecommunications technology to deliver a broad spectrum of health-care services and health professional education in rural areas. He established UC Davis’ first telehealth link in 1992, and today the UC Davis Center for Health and Technology is recognized as a global leader in using telehealth and distance learning to meet the needs of populations in remote and underserved regions.

At the request of the California governor and the UC Office of the President, Nesbitt led a team that successfully applied for more than $22 million in funding from the Federal Communications Commission to establish the California Telehealth Network, which is linking more than 800 sites in a digital health highway. The undertaking is destined to become one of the most expansive broadband networks in the nation dedicated to health care. Under Nesbitt’s leadership, UC Davis has secured nearly $100 million in funding from diverse sources to advance telehealth infrastructure, services, education and research.

Nesbitt has led development of UC Davis’ PRIME programs, which prepare physicians to serve in rural and underserved urban areas. A popular teacher and mentor, Nesbitt was active in bringing excellent education to students at the undergraduate and graduate professional levels. He played a significant role in establishing UC Davis’ Center for Virtual Care, a training resource for students and working professionals throughout the region, and led UC Davis’ nationally recognized Continuing Medical Education programs.

Together with leaders of the National Cancer Institute-designated Comprehensive Cancer Center, Nesbitt launched the UC Davis Cancer Care Network, bringing advanced cancer care and the latest clinical research to Northern California’s rural communities, as well as a robust telehealth program that brings UC Davis clinical expertise to patients in dozens of hospitals, clinics and even farm-labor camps throughout the state.

His research and creative work has resulted in major success in extramural funding and impactful contributions to science. He has authored or co-authored more than 60 journal articles, abstracts and book chapters on the use of telecommunications technology in health care and education. Nesbitt served as the first Chief Scientist for Health for the Center for Information Research in the Interest of Society on the UC Davis campus, a collaboration with the UC campuses in Berkeley, Santa Cruz and Merced.

Nesbitt has received numerous awards for his innovation and leadership. He received the 2012 Justin Ford Kimball Innovators Award, one of the highest honors given by the American Hospital Association for outstanding contributions to health care, and the 2010 Leadership Award from the American Telemedicine Association for his pioneering work to advance telemedicine. He has many awards including the Cal Aggie Alumni Association Distinguished Public Service Award, the UC Davis School of Medicine Distinguished Alumnus Award, the Transformational Leadership award, and the UC Davis Distinguished Achievement award.

Nesbitt received his bachelor’s and medical degrees from UC Davis, completed his residency training through the Spokane Family Medicine Residency Program – an affiliate of the University of Washington School of Medicine – and obtained his master’s degree in public health at the University of Washington. He worked as a primary care physician in the rural Northwest before joining the UC Davis faculty in 1988.