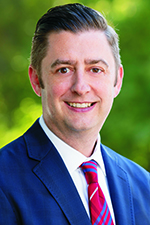 Simmons is the senior most administrator for the UC Davis Medical Center, replacing the prior position of CEO of the hospital, which has been eliminated. His responsibilities include: all inpatient care for UC Davis Health which includes UC Davis Medical Center, UC Davis Children's Hospital, and involves operational, logistical, and patient-support services, nursing and medical staff clinical operations, overseeing UC Davis Health's level 1 trauma and emergency services, surgery and post-operative care services, facility operations, and supply chain management.

Simmons joined UC Davis Medical Center in 2016 as the Chief Operating Officer, and in 2019 he was named Interim CEO of the medical center. Under his leadership, the medical center has become one of the top 50 U.S. hospitals for adults and children, one of the top hospitals in California, and the number one hospital in Sacramento, as ranked by U.S. News and World Report. Under his leadership, the hospital has also received Magnet recognition, which is the nation’s highest honor for nursing excellence; Best Maternity from Newsweek; 4-stars for quality from the Centers for Medicare and Medicaid Services (CMS); and a Center of Excellence Award from the Society for Obstetric Anesthesia and Perinatology.

Simmons is active in the community and involved in various Sacramento community organizations, including the boards of directors for PBS/KVIE, the Saint John’s Program for Real Change, and the Sacramento Chamber of Commerce. He is a member of the American College of Healthcare Executives Northern and Central California Regents Advisory Council, and a Senior Fellow in the American Leadership Forum – Sacramento.