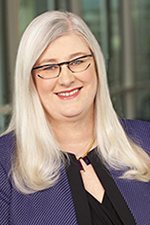 A nurse leader, educator, scientist and nationally recognized expert in gerontological nursing and rural health care, Heather M. Young is a professor and dean emerita for the Betty Irene Moore School of Nursing at UC Davis. She is currently on sabbatical after serving a decade as founding dean, from 2008 to 2018. She returns to the office in August 2019.

Young researches healthy aging with a particular focus on the interface between individuals, family and formal health care systems. She co-leads the Healthy Aging in a Digital World initiative at UC Davis Health, in which a diverse team of experts explore the use of technology to provide a bridge between independent living and access to health care across a person’s lifespan. She also is associate director for strategic partnerships and faculty with the School of Nursing’s Family Caregiving Institute, which seeks to better support family caregivers of individuals with chronic diseases while also improving the preparation of health professionals to provide that support and coaching.

Previously, her research played an instrumental role in shaping long-term care policies in Washington state and beyond and she conducted several longitudinal studies of family caregiving in the context of cognitive and functional decline. Her systems research includes medication management and safety in rural assisted-living settings and hospitals, as well as the use of technology, such as telehealth, and community-based strategies to promote healthy aging. Young is co-director of the Latino Aging Research Resource Center, one of seven National-Institutes of-Aging-funded Research Centers for Minority Aging Research. She is the principal investigator for a Patient-Centered Outcomes Research Institute (PCORI) study seeking to improve health for individuals with diabetes through technology-enabled nurse coaching.

As founding dean and Associate Vice Chancellor for Nursing for UC Davis Health, Young led the establishment of the School of Nursing, the development of five new graduate programs in Nursing Science and Health-Care Leadership, the design and construction of the 70,000-square-foot Betty Irene Moore Hall and the formation of a nursing science research program focused on healthy systems and healthy people. She served as a Commissioner on the California Future Healthcare Workforce Commission.

In addition to her extensive academic and research background, Young practiced in critical care and as a geriatric nurse practitioner in community-based, long-term care. Previously, she directed the John A. Hartford Center for Geriatric Nursing Excellence at Oregon Health and Science University and, prior to that, she held a joint appointment on faculty at the University of Washington School of Nursing and as the chief operations officer for a retirement community company.