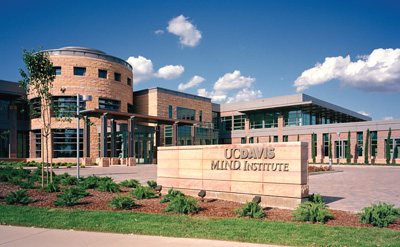 Researchers at the UC Davis MIND Institute are internationally recognized leaders in finding answers to autism.

The NIEHS-recognized studies include research led by Cecilia Giulivi, professor of molecular bioscience in the UC Davis School of Veterinary Medicine, which found that children with autism exhibit dysfunction in their mitochondrial DNA, and a study led by Rebecca J. Schmidt, assistant professor in the Department of Public Health Sciences, which found that women who take prenatal vitamins early are less likely to have a child with autism.

Giulivi's study was published in the Journal of the American Medical Association. It found that cumulative damage and oxidative stress in mitochondria, the cell's energy producer, could influence both the onset and severity of autism, suggesting a strong link between autism and mitochondrial defects.

The study examined a small sample of children enrolled in the Childhood Risk of Autism from Genetics and the Environment (CHARGE) Study, and found that mitochondria from children with autism consumed far less oxygen than mitochondria from a group of control children, a sign of lowered mitochondrial activity. The finding suggests that deficiencies in the ability to fuel brain neurons might lead to some of the cognitive impairments associated with autism.

"It is always an honor to contribute to the advancement of science," Giulivi said of the recognition. "However, it does not surprise me, given the exceptional group of scientists who worked on the project, the generous participation of the families of the CHARGE Study and the resources at the MIND Institute and UC Davis in general."

The study by Rebecca Schmidt and her colleagues, published in the journal Epidemiology, also was named one of the top 10 research advances of 2011 by Autism Speaks.

It found that women who reported not taking a daily prenatal vitamin immediately before and during the first month of pregnancy were nearly twice as likely to have a child with an autism spectrum disorder as women who did take the supplements. The associated risk rose to seven times as great when combined with a high-risk genetic make-up.

Schmidt and her collaborators postulate that folic acid, the synthetic form of folate or vitamin B9, and the other B vitamins in prenatal supplements, likely protect against deficits in early fetal brain development. Folate is known to be critical to neurodevelopment and earlier studies have found that supplemental folic acid has the potential to prevent up to 70 percent of neural tube defects.

"We are honored to have our research recognized by the NIEHS, demonstrating the need for better understanding of modifiable environmental factors, like nutrition, that may hold promise for reducing risk for developmental disorders like autism," Schmidt said.

Autism Speaks recognized the MIND Institute for its autism investigations in a broad range of fields of inquiry, including epidemiology, medical microbiology and immunology, and the rate of reoccurrence of the condition among siblings. The organization announced the Autism Speaks Top 10 Autism Research Achievements of 2011 on its website.

In addition to the prenatal vitamin study led by Rebecca Schmidt, which also was recognized by the NIEHS, the three studies included research led by Paul Ashwood, assistant professor in the Department of Medical Microbiology and Immunology, titled "Elevated plasma cytokines in autism spectrum disorders provide evidence of immune dysfunction and are associated with impaired behavioral outcome." It was published in January 2011 in the journal Brain, Behavior and Immunity.

The research found significantly altered adaptive cellular immune function in children with autism spectrum disorders that may reflect dysfunctional immune activation, and that these alterations may be linked to disturbances in behavior and developmental functioning.

The third study Autism Speaks acknowledged was led by Sally Ozonoff, a professor in the Department of Psychiatry and Behavioral Sciences.

At the UC Davis MIND Institute, world-renowned scientists engage in research to find improved treatments as well as the causes and cures for autism, attention-deficit/hyperactivity disorder, fragile X syndrome, Tourette syndrome and other neurodevelopmental disorders. Advances in neuroscience, molecular biology, genetics, pharmacology and behavioral sciences are making inroads into a better understanding of brain function. The MIND Institute draws from these and other disciplines to conduct collaborative, multidisciplinary research. For information, visit mindinstitute.ucdavis.edu.

Ozonoff's study, "Recurrence risk for autism spectrum disorders: A Baby Siblings Research Consortium study," was published in the journal Pediatrics in August 2011. The study found that the risk that an infant with an older sibling with autism also will develop the disorder, previously estimated at between 3 and 10 percent, is substantially higher at approximately 19 percent.

While Ozonoff and her colleagues found a combined estimated risk for all participants of nearly 19 percent, the study found an even more elevated risk of recurrence of over 26 percent for male infants, and over 32 percent for infants with more than one older sibling with autism.

Study participants were enrolled in separate studies that are part of the Baby Siblings Research Consortium, an international network that is supported by Autism Speaks that pools data from individually funded research sites to facilitate the study of infants at high risk of developing autism because they have an older sibling with the condition.

"It is a great honor to have our work selected as one of Autism Speaks' Top 10 papers of the year," Ozonoff said. "These findings would not have been possible without the teamwork of scientists at 12 universities who collaborated on the project, the support of the Baby Siblings Research Consortium, and especially the selfless devotion of the hundreds of families to autism science."