Don Lewis: Committed to bereavement and hospice care for all 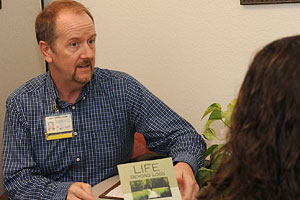 Don Lewis is the bereavement and volunteer coordinator and fundraising chairperson for UC Davis Health System’s hospice program. For the many hats he wears and the lives he touches, he was awarded the Excellence in Diversity award at the health system's 2011 Employee Excellence Awards and Diversity Celebration.

“He is extremely dedicated to the provision of exemplary end-of-life care,” says Stacey Magee, Home Health and Hospice program manager. “His passion not only includes participating in the care planning of hospice patients and families but extends to the support of families through bereavement.”

For example, to supplement the long-running adult bereavement support group, he created a support group for the parents of pediatric-aged patients.

“Volunteers are of enormous benefit to our families, and you can’t get more diverse than the hospice population of UC Davis, which reflects the population of Sacramento — diverse in culture, language and age."
— Don Lewis

Magee adds that Lewis’ commitment and vision also facilitated the development and implementation of the health system’s nationally recognized Grief Support Group for Young Adults, which came about when Lewis, along with members of the bereavement committee, recognized yet another underserved group: those ages 17 to 24, too old for the children’s bereavement group, generally ages 4 to 16, and too young and uncomfortable in the adult group, where the mean age could be 50 to 60.

“We found out later that research supported our arrangement,” Lewis says. “New science shows that the ability to effectively convey emotions and work through feelings is more difficult for young adults, since their brain development is incomplete. They need a little more direction, and a little more structure.”

The program has received much praise. In the fall of 2010, Lewis presented the program at the National Hospice and Palliative Care Organization.

“I thought I’d have people comparing their programs to ours,” he recalls. “What I got was, ‘How did you do this?’ Nobody else there was doing what we were doing, which was amazing to me. There are only a few programs like this.”

No one turned away

As volunteer coordinator, Lewis’ primary challenge is playing matchmaker between the volunteer and patient home, matching languages, skills and personal considerations, such as not working in the home of a smoker.

“Volunteers are of enormous benefit to our families, and you can’t get more diverse than the hospice population of UC Davis, which reflects the population of Sacramento — diverse in culture, language and age," he says.

The consideration of age is especially significant. Hospice programs tend to focus on the elder population, because they are supported through reimbursements by programs like Medicare, and they simply don’t have the resources to treat pediatric patients. UC Davis hospice turns away no one.

“Our youngest client was a day old,” he says. “When a baby is born and immediately discharged to hospice, the care we provide is crucial.”