UC Davis study shows that fast-food dining is most popular for those with middle incomes, rather than those with lowest incomes 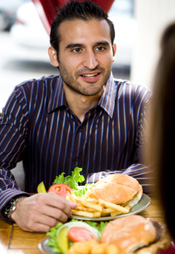 New UC Davis research weakens the popular notion that fast food should be blamed for higher rates of obesity among the poor.

A new national study of eating out and income shows that fast-food dining becomes more common as earnings increase from low to middle incomes, weakening the popular notion that fast food should be blamed for higher rates of obesity among the poor.

"There is a correlation between obesity and lower income, but it cannot be solely attributed to restaurant choice," said J. Paul Leigh, professor of public health sciences at UC Davis and senior author of the study, which is published in the December issue of  Population Health Management. "Fast-food dining is most popular among the middle class, who are less likely to be obese."

In conducting the study, Leigh and co-author DaeHwan Kim, specialists in health economics, used data from the 1994 to 1996 Continuing Survey of Food Intakes by Individuals and the accompanying Diet and Health Knowledge Survey. The nationally representative sample of nearly 5,000 people in the U.S. included data about food consumption patterns, including restaurant visits, over two nonconsecutive days, which was compared with demographic variables such as household income, race, gender, age and education.

They found that eating at full-service restaurants, which involve a range of food choices and sit-down service, followed an expected pattern: as income rose, visits increased. In contrast, eating at fast-food restaurants, characterized by minimal table service and food preparation time, followed a different pattern. Fast-food restaurant visits rose along with annual household income up to $60,000. As income increased beyond that level, fast-food visits decreased. 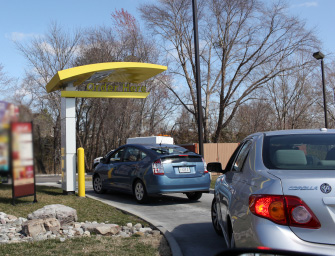 The study showed that fast-food restaurant visits rise along with annual household income up to $60,000.

Leigh noted that the fast-food industry attracts the middle class by locating restaurants right off freeways in middle-income areas and by offering products that appeal to a large proportion of Americans.

The study was limited by the fact that the data came from the mid-1990s, the most recent information available on this subject. Although incomes have changed considerably since then, Leigh believes that the eating-out patterns found in this study would still hold if more up-to-date data were available.

"It has traditionally been difficult to define patterns of restaurant consumption for Americans according to their incomes," said Leigh. "By using a very large, nationally representative database that includes detailed information on income, we have solved that puzzle."

About the UC Davis Center for Healthcare Policy and Research

The Center for Healthcare Policy Research conducts research on health-care access, delivery, costs, outcomes and policy to improve the practice of medicine, especially primary care. Established as an interdisciplinary unit, the center includes more than 80 health-care researchers who represent disciplines ranging from business management and epidemiology to psychiatry and pediatrics. For more information, visit the center's website.

Based on his findings, Leigh, who is affiliated with the UC Davis Center for Healthcare Policy and Research, suggests that policymakers and researchers look beyond restaurant type for reasons for and solutions to the obesity epidemic. He will study the effects of food pricing on food choices.

"Pricing is critical to low-income families, and over the past 30 years the costs of less healthy options have dropped compared to healthier fare," said Leigh. "One potential way to encourage healthier eating could be to charge taxes that increase based on the number of calories in food. Proceeds from the taxes could then be used to subsidize and reduce the costs of healthy foods."

Co-author DaeHwan Kim, who earned his doctorate in economics at UC Davis, is currently with the Korea Insurance Research Institutes in Seoul.

A copy of Kim and Leigh's study — "Are Meals at Full-Service and Fast-Food Restaurants 'Normal' or 'Inferior'?" — can be requested by e-mailing kruehle@liebertpub.com.

The research was funded in part by the National Institute of Occupational Safety and Health.