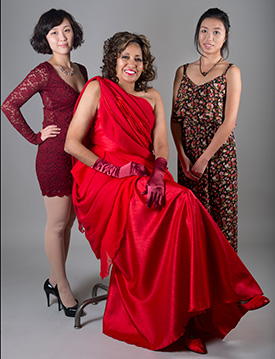 Barbara Ross wears a red dress created by UC Davis students Betty Chen (left) and Heaji Richards, whose design was inspired by Ross' elegance and her courage in overcoming heart disease. Click here to view larger version of this photograph.

For some, heart disease symptoms can be subtle and build over time. For Barbara Ross, the change was sudden and frightening.

Usually able to hike and bike on an annual trip to Yosemite, at age 53 she had a hard time keeping up. At her office where she was community and government relations director for UC Davis Health System, a flight of stairs she ran up each day seemed an impossible climb.

“My body was definitely telling me something,” she said. “I just didn’t know what.”

Tests at UC Davis Medical Center showed she had atrial fibrillation — an irregular heartbeat (or arrhythmia) due to problems with the electrical signaling system in her heart and a risk factor for stroke, heart failure and other cardiovascular conditions. The cause was a prolapsed heart valve that was unable to effectively regulate blood flow and had become leaky.

“Quite honestly, I was terrified,” Ross said. “It was hard to think of myself as sick, let alone needing surgery. I didn’t want to be away from my family or my job or my home. I was also responsible for taking care of my elderly mother. It just wasn’t great timing.”

“Barbara’s reaction was completely understandable and very common,” said Villablanca. “Women are often pulled in many different directions and are dedicated to taking care of others. Heart disease can be a wakeup call that says, ‘Put yourself first.’”

"Listen very carefully to your body when it tells you that something is wrong. Even if it’s subtle, you know the changes are there."
— Barbara Ross

Ross and Villablanca worked together on a plan that helped her envision both her treatment and recovery. It began with cardiothoracic surgeon J. Nilas Young replacing her diseased valve with a mechanical one. Young also created a series of incisions in her heart tissue to reduce the erratic electrical signals.

After returning home from the hospital, five months of cardiac rehabilitation that combined nutrition education and monitored exercise with psychological support helped finish her recuperation. Although feeling “better than ever,” Ross knew her life needed to change. She retired from her job.

The UC Davis Women’s Cardiovascular Medicine Program and UC Davis Department of Design are creating a collection of student-designed red dresses to raise awareness about heart disease in women across generations.

This year, a team of students created a special dress that was inspired by Barbara Ross’ story of heart disease and recovery. Ross proudly modeled it Feb. 6 at the Women’s Heart Care Education and Awareness Forum, an annual education event for community leaders.

“I had worked in professional positions almost every day of my life since graduating college at age 21 and defined myself a lot in terms of my career, but getting sick reset my thinking about what was important,” Ross said.

Today, almost a decade after her surgery, she is happy for the time she spent with her son and daughter before they went away to college and with her mom before she passed. When not traveling with her husband, she volunteers as an ambassador for UC Davis and The Sacramento Chapter of The Links Inc. community programs, exercises regularly, stays spiritually connected, celebrates with her sister-friends, eats healthy meals and focuses on maintaining her weight. She faithfully takes her medications and sees her physician regularly, who continues to monitor Ross' arrhythmia, which is now controlled with a pacemaker. She also tells her story every chance she gets, especially to African American women who may not know their unique risk factors for cardiovascular disease.

“My advice is to be less reactive and more reflective, but not with your heart health,” Ross said. “Listen very carefully to your body when it tells you that something is wrong. Even if it’s subtle, you know the changes are there. Don’t ignore them, but take steps right away to care for your heart.”