It’s all about the voice

Video: We catch up with UC Davis’s larynx transplant patient on her five-year anniversary.

There’s no singin’ the blues for Brenda Jensen these days, and it’s been that way for the past five years. UC Davis Medical Center’s historic larynx transplant patient returned to Sacramento recently, praising her care as she checked in for a periodic appointment with Peter Belafsky, a voice and swallowing specialist and one of her transplant surgeons from the UC Davis Department of Otolaryngology.

“To get a new voice, that’s not very common,” said Jensen, who, before her transplant in October of 2010, spent more than a decade using an electronic voice device to communicate with people. “I was very fortunate, very lucky and very blessed.”

Organ transplants such as kidney, pancreas, liver and heart are common procedures, with more than 25,000 transplantations taking place around the nation last year. UC Davis is one of the top-ranked hospitals in the nation for kidney transplantation, but there have been only two documented larynx (voice box) transplants in the world, the most recent one taking place about five years ago at the university’s medical center.

The joy of being able to say ‘thank you’

Jensen, a Modesto, Calif. resident, said that before getting her new larynx, kids always looked at her in amazement, and often laughed because her then-artificial voice made her sound like a robot. 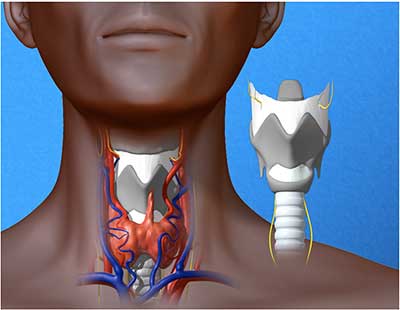 Today, wearing a rather stylish tracheotomy tube collar that enables her to breath, she talks freely and constantly, still amazed at the good fortune of being one of only two people in the world to have their voicebox successfully replaced.

“Just being able to communicate with people instead of having people look at you like you’re an oddball because you can’t answer their questions [is a relief],” Jensen added. “Now, when someone opens a door you can say ‘thank you.’”

One of the most complex transplant surgeries ever performed

Jensen’s transplant was one of the most complex transplant surgeries ever performed. It required an international team of surgeons, including Belafsky and UC Davis colleagues Gregory Farwell and Quang Luu, as well as nearly two dozen nurses, technicians, transplant coordinators and other medical personnel. During the 18-hour operation, the team replaced Jensen’s larynx, thyroid gland and trachea (windpipe).

Less than two weeks after the procedure, Jensen was able to voice her first naturally articulated words in 11 years. Farwell, a head and neck specialist and the primary surgeon for the transplant, asked her to simply try counting numbers. Jensen began with a cautious and somewhat croaky, “One, two, three,” followed by a big smile and some heartfelt words of appreciation for her transplant team: “You guys are amazing.” 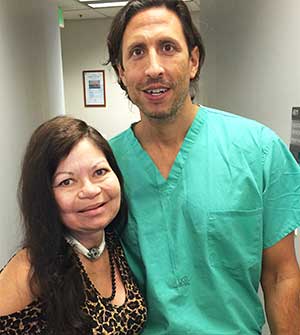 Jensen with one of her larynx transplant surgeons, Peter Belafsky.

Prior to the transplant, Jensen was unable to speak or breathe normally because of complications stemming from a previous surgery that had closed off her airway and made her completely dependent on a tracheotomy tube. Jensen’s donor organ came from an accident victim, but contrary to popular thought, Jensen's voice is her own and not that of the female donor. An individual's unique voice is a function of the way sound travels and resonates through the mouth and nose, and it is formed by the movement of an individual’s tongue and lips. In other words, Jensen new voicebox enabled her to regain her original voice, just like it was before medical problems compromised her ability to speak.

Jensen’s case was also unique. The transplant was an elective procedure because her condition, while uncomfortable, was not life threatening. But she was an ideal candidate for the procedure because she already was on immunosuppressive drugs from a previous kidney and pancreas transplant. Jensen’s surgeons noted that she embodied the determination of a motivated patient, something essential for successfully being able to cope with a lengthy, highly experimental procedure and the subsequent post-operative rehabilitation.

“Being able to talk has changed my life quite a bit,” said the always-smiling Jensen, during her recent return visit to the medical center.