Prudence had two normal pregnancies. But after delivery, her babies died without medical explanation. UC Davis researchers investigated the causes of death for more than two years until they discovered a lethal gene mutation that causes lactic acidosis — excessive acid build-up — and ultimately cardiac arrest and death.

“This is something that you don’t ever want to happen to anyone, no matter who they are or what the circumstances,” said Prudence Marsh. “It’s just too painful.”

Today, Prudence and Jon are the proud parents of Sadie, an active one year old.

“I think finding the cause brought closure for all of us, and certainly for the parents,” said Veronica Tache, a maternal-fetal specialist and assistant professor of obstetrics and gynecology at UC Davis.

“But for us as the providers who took care of Prudence, to understand why this happened and to then be able to potentially help other couples who have gone through this is very important.”

"This case really humbled us. It made us all think outside the box in terms of possible etiologies."
— Veronique Tache

Tache was a member of the team of experts who identified the disorder by sequencing the whole exome sequencing of both infants. The cases are described in a paper published earlier this year in Case Reports in Obstetrics and Gynecology.

“This case really humbled us. It made us all think outside the box in terms of possible etiologies,” she said. “To go through one newborn loss is tragic enough, but two consecutive newborn losses, without an explanation, is unimaginable. I really believe the combined efforts of all of our team, leveraging each person’s unique strength, made all the difference.”

The two earlier deaths occurred two years apart. In both instances, Prudence had uncomplicated deliveries of seemingly healthy babies. Yet the conditions of both newborns rapidly deteriorated, causing death in less than two hours in the first instance and 12 hours later in the second instance.

Upon the loss of the second newborn, the care team requested whole exome sequencing of the newborn, a strategy used to selectively sequence the coding regions of the human genome to discover rare or common variants associated with a disorder. The analysis showed abnormalities in the lipoyltransferase 1 (LIPT1) gene which had been recently identified as a cause of metabolic acidosis in infants.

Lactic acidosis occurs when lactate accumulates in the body, producing a pH of less than 7. Severe and prolonged lactic acidosis results in multi-organ energy failure and may prove fatal.

With the finding of the LIPT1 variants, a member of the team, Genetic Counselor Liga Bivina, obtained DNA samples from the first newborn to determine whether that infant was affected as well. The sample was sent to UCLA and tested for the same LIPT1 mutation seen in the second infant. The test confirmed the mutation in the first child.

During the course of the genetic evaluations, Prudence became pregnant a third time. She underwent chorionic villous sampling, a procedure that can identify chromosomal abnormalities and other inherited disorders associated with birth defects and genetic diseases. The evaluations found that her third child did not have the genetic disorder. 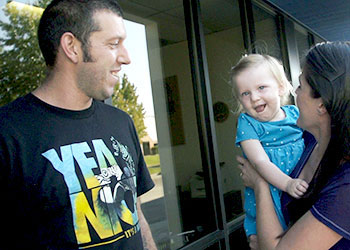 Sadie with her parents, Jon and Prudence.

“They called us, and I was at work,” said Prudence Marsh. “I went around the corner so no one could see me crying, and they said, ‘She’s not affected. She's not a carrier. It’s not even there.’”

Prudence went on to deliver Sadie, who was born healthy and at full term.

“We knew if she made it the first few hours that we would probably go home with her,” said Jon Marsh.

Sadie has since celebrated her first birthday – a celebration that drew relatives and friends from far and wide.

“This couple had a strong impact on me personally and on my work taking care of women with high-risk pregnancies,” Tache´ said. “It’s important to not underestimate the power of teamwork, and the desire for a group of people in various specialties and across different universities to put their minds together. It is hard to put into words the joy I felt seeing this wonderful couple take home their first child.”