Is it safe to go the distance?

Marathons and half-marathons rise on the bucket list for many

On December 4, the California International Marathon welcomed experienced endurance athletes and first-time marathoners alike across its finish line in front of the Capitol building. UC Davis volunteers who staffed the medical support tent treated athletes for both predictable ailments as well as some more serious problems.

As the popularity of high-intensity competitive sports grows, more and more athletes are weighing the risks and rewards of the necessary endurance training. We talked to sports medicine expert Brandee Waite about preparation and training for your first — or next — marathon. 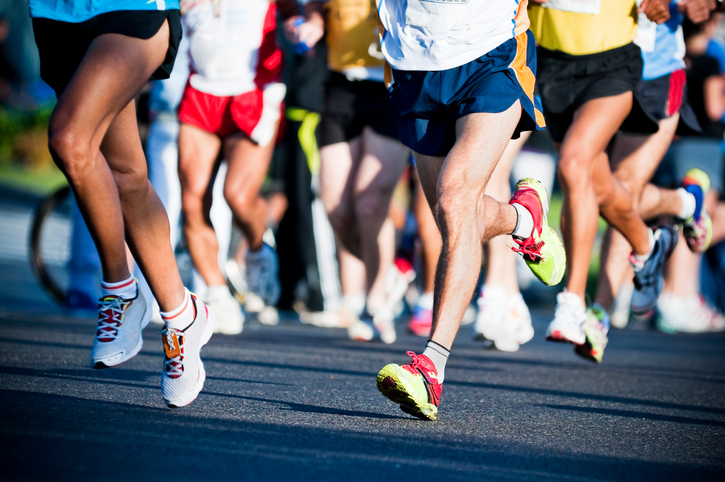 What training guidance do you give people who want to run a marathon?
Start slowly.  I recommend you do not increase your mileage by more than 10 to 15 percent per week to best avoid injury.  Set some interim goals of completing a 5K, 10K or half marathon if you are new to running.  Joining a running club (like the ones available through local running shoe stores or running clubs/associations) can put you on a good schedule to avoid injury while ramping up your mileage. STRETCH AFTER YOU RUN!

What are the health requirements of starting such a rigorous training program? Are there any medical tests you recommend in advance?
Check with your primary care doctor to get clearance if you have known cardiac disease, high blood pressure or other medical illness. If you have not been active in fitness activities, and haven’t seen your doctor in a while, it’s a good idea to check in prior to starting a running program to be sure no new medical issues have popped up. Remember that fitness/running/jogging and walking programs can be designed to accommodate almost any level of fitness, and can actually treat or improve many medical problems (such as diabetes, high blood pressure, etc.).

Brandee Waite is a physician with the UC Davis Sports Medicine Program. She treats a wide range of professional and elite athletes as well as caring for “weekend warrior” level athletes. She is currently part of the medical support team for the Sacramento Republic FC professional men’s soccer team and has served as a team physician for the U.S. national track and field program, Sacramento’s professional basketball teams, and the Sacramento ballet.

What are the most common injuries that come with training for or while running a marathon?
The top two are Achilles tendinitis and runner’s knee, also known as patellofemoral pain.

We often hear about runners who get sick during a race. Is this just a part of the process or something that can be avoided?
Some people get stomach upset, abdominal pain, nausea or other gastrointestinal symptoms while running — but not everyone. This can be avoided by modifying pre-run and during-run meals, snacks, supplements and general diet. A sports nutritionist can help you figure out what works best for you, and there are many strategies to avoid “runner’s gut” available online.

We also hear sometimes about people who have more serious health outcomes during a race, like a cardiac event. Is this something that can be predicted and avoided?
Yes and no. People with certain known heart conditions are not advised to run due to increased risk of having a major cardiac event. However, there are a certain number of people who are healthy and have no known cardiac risk factors who can suffer a major cardiac event while running. It’s not always possible — even with the best medical testing — to detect every person at risk for a major event.

How can we best listen to our bodies when we’re actively pushing ourselves to the edge of our physical limits?
If you feel horrible, slow down or stop. If you start to feel better, it’s probably OK to keep going. If you don’t start to feel better, do not push yourself into extreme pain or fatigue. The more you train, the more you can distinguish between just feeling poorly from a tough run versus feeling something more serious. You do need to push beyond comfort sometimes to advance training, but if you train properly, you should be able to finish a race without major problems.

How does the discipline and practice of running carry over to, or impact, other aspects of a runner’s life? What is the greatest takeaway for you, or that you’ve commonly heard?
Some people have mentioned that running has helped improve their mood, depression or anxiety, or improved their relationships because they are happier with themselves. Some have found the discipline of running — and other sports — gives them a grounding to be more disciplined in other areas of their lives.

Many people — especially ultra-distance runners — tell me that the greatest benefit is in the people they meet and the friends they make in the training groups, on the trails, or even in the races. I have immensely enjoyed the travel and the incredibly adventurous people I’ve met as the medical director for events on every continent — yes, even Antarctica!