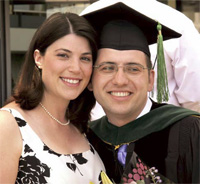 Allie Greene and her husband Daniel on his graduation day.

"Allie Greene, our loving daughter, also a sister, wife, friend and aspiring emergency room physician, died in an accident just weeks before her medical school graduation. Allie had a passion for medicine. Those who knew her grieve that Allie could not have the career for which she so diligently prepared."

Katy and Bob Greene wrote these words about their daughter, Alexandra, a fourth-year medical student at the UC Davis School of Medicine, following her death in a plane crash in Arizona in April 2007.

Allie's death at age 28 was a tremendous loss. Family, friends, fellow students and colleagues at UC Davis Health System speak about Allie as an enthusiastic, creative and caring person whose dedication to medicine and helping others won't soon be forgotten.

Following her tragic death, Allie's grieving classmates, her parents and her husband, Daniel Micsunescu, who was a surgical resident in the UC Davis Department of Surgery, created the Dr. Alexandra Greene Award in her memory. A memorial scholarship fund in Alexandra's name has been established to help other promising students through medical school.

Allie Greene studied to be an emergency room physician.

From a very early age, Allie learned about helping those less fortunate than herself. When she was eight, her parents asked for her help to deliver fresh apples to an orphanage in Mexico. Of the experience, she wrote later in a high school essay: "As I watched the children play in the dusty courtyard and eat the paint from the sides of the building that comprised the orphanage, I realized how privileged I was to have a family who provided for me. My parents never let me forget that I had a responsibility to use my educational resources to make a difference in the lives of others."

Allie's desire and commitment to pursuing a career in medicine became evident on her first night as an undergraduate at UC Davis, when she spent it sleeping on a sidewalk because she did not want to lose her place in line to register for an emergency medical technician program. Her night in the sleeping bag paid off. She registered for the class, which she regarded as her first step toward realizing her goal of becoming an emergency room physician.

Her work as an EMT provided Allie with experience in treating patients before enrolling in medical school. In 1998, she received commendations for her outstanding performance and bravery while responding to a multi-casualty shooting at the Alameda County Fair. She established a triage area, attended to four gunshot victims, and created a park-wide system for reuniting separated families. 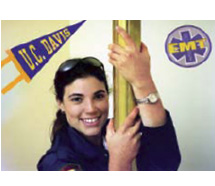 During a trip to Quito, Ecuador, as a pre-med student, she heightened her awareness of disparities in health care while volunteering in public clinics. She viewed her six weeks there amid the poverty and illness as a test of her commitment to a career as a physician and international volunteer.

She witnessed firsthand underfunded and overpopulated hospitals, which fed her desire to practice medicine where it is needed desperately. She reflected in her journal, "If I can help just one person from starving or dying of a terrible disease then that is one prayer answered and one example for others to follow. I must start small, help who I can, and see what happens."

In addition to patient care, Allie understood the immense importance of research and of discovering new knowledge that will help patients in the future. She worked on the National Emergency Airway Registry, reviewed protocols for California Emergency Medical Services, investigated overcrowding in the emergency department, and authored several Web articles for the Emergency Medicine Residents' Association.

Allie achieved all these accomplishments while refusing any accommodation for a learning disability that was discovered during her freshman year at UC Davis. "In medical school, she had to work hard to keep up with her schoolwork during the first two years," Peter Sokolove, residency program director, told the Sacramento Bee shortly after her death. "But in her last two years, when she was doing clinical rounds, she received honors in every course. In my 12 years here, that's the only time it's ever happened…She was destined for greatness."

"Allie was exactly the kind of student we strive to attract to our School of Medicine. She believed in the power of collaboration and reducing health disparities, not only in her community, but around the globe."
— Ann Bonham, UC Davis Health System Executive Associate Dean for Academic Affairs

"Allie was exactly the kind of student we strive to attract to our School of Medicine," says Ann Bonham, executive associate dean for Academic Affairs. "She believed in the power of collaboration and reducing health disparities, not only in her community, but across the globe."

Allie was set to begin her medical career with her residency training in emergency medicine at UC Davis, says Claire Pomeroy, vice chancellor for Human Health Sciences at UC Davis and dean of the School of Medicine. "We and the rest of society have lost the chance to benefit from the care and compassion Allie would have brought to our profession as a dedicated, caring physician."

For information about the Alexandra Greene, M.D. Memorial Fund, contact Elizabeth Abad at (916) 734-9416 or medalumni@ucdavis.edu.