The fully integrated program is the first of its kind in the Western U.S.

This video contains pre-pandemic file footage. It is best viewed in Chrome or Firefox.

The UC Davis MIND Institute and the UC Davis Office of Diversity, Equity and Inclusion have received a $2.1 million grant from the U.S. Department of Education to create an inclusive, four-year college program for students with intellectual disabilities.

The Supported Education to Elevate Diversity, or SEED, Scholar program will be the first of its kind in California, and the goal is to create a model that could be used by other universities in the state.

“It’s a game-changer. It’s the only thing like it in the west,” said Beth Foraker, an instructor in the UC Davis School of Education who will be the co-director of the SEED Scholar program.

The first group of 12 students is expected to begin classes in the fall of 2021 at UC Davis, and will likely include people with autism, Down syndrome, fragile X syndrome and other neurodevelopmental disabilities. Foraker, whose 21-year-old son Patrick has Down syndrome, has been working toward this goal for years. 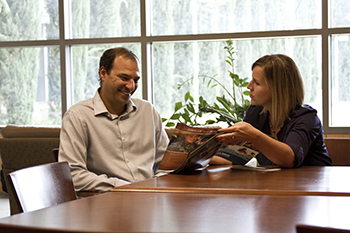 Students will attend classes, have internships and jobs, live on campus and take part in extra-curricular activities (photo: former intern, 2014)

“Ninety-seven percent of adults with intellectual disabilities are living in poverty,” she said, noting that post-secondary options are severely limited, with only a handful of four-year inclusive programs in the country. “This is a chance for them to go on to make a living wage, to live an authentic life of true freedom.”

The students will live in campus housing, attend classes and take part in extracurricular activities. An internship component is also planned, with options for placement within UC Davis Health, on campus and in legislative offices at the State Capitol.

“This really is about diversity, equity and inclusion,” said Leonard Abbeduto, director of the MIND Institute. “People with intellectual disabilities should have the same rights to post-secondary education options as everyone else.”

The MIND Institute and the Office of Diversity, Equity and Inclusion will jointly run the program, which will be fully integrated into the campus community.

“I am excited about partnering with the MIND Institute to expand inclusive education and excellence,” said Renetta Garrison Tull, vice chancellor for diversity, equity, and inclusion. “Having support from the Department of Education for this new initiative to welcome students with intellectual disabilities into the UC Davis Aggie family is a reason to celebrate!”

SEED scholars will have a support system, including undergraduate students who will serve as peer mentors, helping with academics as well as social activities, health and wellness and oversight of internships. A curriculum that includes regular UC Davis courses, as well as some special courses focused on relevant issues such as independent living, will also be designed. The goal is to create a program that will culminate in a meaningful credential for the graduates.

The five-year grant from the U.S. Department of Education falls under the Transition and Postsecondary Programs for Students with Intellectual Disabilities, or TPSID, which was created in 2010. UC Davis is the first university in California to receive a TPSID for a four-year inclusive, residential program. The grant will cover about 80% of the cost of creating the program, with the remainder being covered largely by philanthropy.

“This is a very exciting opportunity for UC Davis to be on the forefront of offering college experiences for young people with disabilities,” said School of Education Dean Lauren E. Lindstrom, who’s also a MIND Institute faculty member. “The partnership between the MIND Institute and the Office of Diversity, Equity and Inclusion is very innovative.”

The goal is to expand that partnership far beyond UC Davis, with the program serving as a model for other UC and CSU schools.

“We should be able to replicate our program across every UC and every CSU, which is unreal and amazing,” said Beth Foraker.

The MIND Institute and the Office of Diversity, Equity and Inclusion will be hiring new staff members in the coming months to design the curriculum, housing options and peer mentor program, as well as a system for outreach to local schools to attract applicants.

“Even though we were motivated originally by the benefit to the students with intellectual disabilities, I think there’s going to be a great benefit to UC Davis undergraduate students in general,” Abbeduto said. “This is why we encourage diversity in all of its forms. We want people to understand the world from everyone else’s perspective because there’s great value in that.”