Working to change the narrative

Al describes how nursing school opened his eyes to the health disparities in the African American community and inspired him to change. 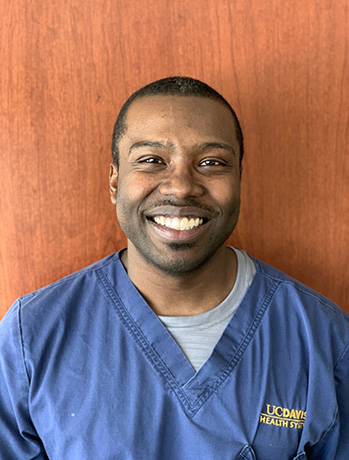 That really just stunned me that I'm, "Wow, I had no idea that these were diseases that were very prevalent in our community." Just because I didn't have any immediate exposure to it, or a ton of people in my family that had suffered from it.

So it was really, okay, maybe we need more people that can connect to us. That can come in in that aspect and be, "Oh look, I can tell what you're feeling without even you having to say anything, because, you know what? I know what that look means. I see that look at home on my sister's face, my dad's face. He looks at me like that sometimes."

So that aspect, once I was going through doing rotations, interacting with people, it really touched me inside and was, "You have to do this now." It's not really, if you're chosen anymore, it's "I have to do this and I've got to put everything I can into it."

Because I know, just the way that I look. The fact that I am a male, the fact that I am African-American, people are going to look at me and already form some kind of a conception or narrative around me, without even knowing me.

So really at that point I said, "You know what? Let me then if I'm going to have people looking at me like that, let's make sure I go 110 all the time." I've got to excel. I can't just get by, because if I'm getting by, then people are going to be, "Oh, there he goes. Trying to slack by again."

So I really took a lot of time in nursing school, studying a lot of hours in the library. Lots of Red Bulls. I don't drink any caffeine now, except for maybe a cup of coffee because of that.

But really tried to make myself into a really good person to be developed into a nurse moving forward. And I hope I'm doing a good job.