It only takes a moment

Alexandria, a nurse in the Emergency Department, talks about how building a relationship with her patient and resident on shift changed her perspective on nursing. 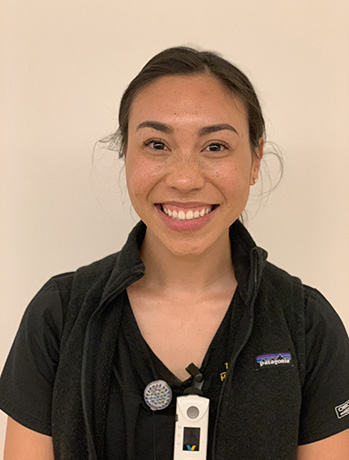 I felt like there's a lot of patients I could probably pinpoint, but there's one specific patient and I was newer here, so it was probably within the first six months that I was here at UC Davis. It was a gentleman, he was probably in his 40s maybe, but pretty extensive medical history and stage liver disease. A couple other conditions that are escaping me right now, but he was basically on hospice at this point, came into the ER and they were starting to talk about comfort care and what that looked like. And his stay here when I was taking care of him he was at that crossroad of realizing where he was in his condition and what that meant and just the idea around a terminal disease and he wasn't okay with it. And I think that he was in that denial phase. And so he was projecting that towards me to our staff. He was very upset about everything.

He was having trouble grasping the fact that if you decide to leave, we're not sure how long you'll be alive and we're here to help you and we're here to help you navigate through this time. And he was just really upset with his care and the answers that he was getting from the doctors weren't what he wanted to hear. And so he was saying that he was going to leave AMA and that was probably the first time in my nursing career that a patient actually made me cry because he was just very upset and I think he was saying things he probably didn't mean, but they were hurtful words. And I let my resident know that I was having a difficult time with that and he helps me see this is probably not who he is. He's got a lot on his plate and he's trying to navigate this whole thing and trying to figure out what this all means.

And so we actually had a sit down, me and the resident and the patient and that was probably the most memorable moment of my nursing career so far is just being there with a patient and hearing tough news that I'm sure that he didn't want to hear. That was the last thing he wanted to hear, but him realizing that we were just there to help him and whatever that meant, whatever he needed, whatever that looked like, we were here to help him get through that situation. And it really just gave me a moment to pause and remember that the patients in our ER, this is probably one of the worst days of their life. They're not here in the ER because it's just a routine checkup and they're here to say hi to their doctor or anything like that, it's emergency medicine and they're here for a reason and they're not having good days.

And also just being able to sit down with the resident and have a provider actually take the time to pull up a chair and sit down with us and really just talk to us. Listen to the patient. So that's probably the most memorable patient experience I've had. It's really given me a different perspective to remember that the patients that we're serving, they have a lot of things going on in their life, and they're not just a diagnosis. They're not just a chief complaint and a set of vital signs. They have things that they're emotionally processing and going through, so.

Sandie Dial: It’s never too late to find your passion