It’s always being there for others

Jonathan recounts a powerful moment that taught him how important it is to be present for both his patients and his coworkers and that sometimes, it’s not about saving a life. 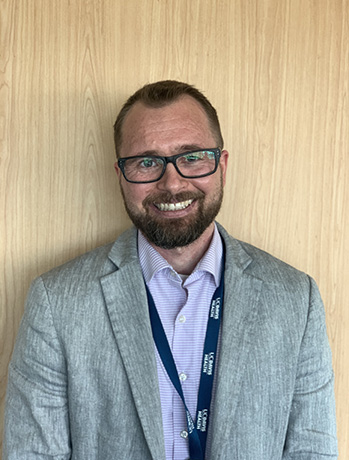 ... Again, to me, it's always, it always goes back to being there for others. And I would say so in my early days, and again, working in the ER, and at the bedside, and in trauma centers, it's very, very, very easy to really remember your why. I can look back and I have literally brought people back to life, and that's so unique. But I've also been there to escort people out of the world as well. And they both bring such a special, I guess, ability, or sensation if you will. And to really enable you to remember why you're doing what you're doing.

What I'll never forget, probably one of my foundational moments as a nurse that I still to this day use as an anchor, when I'm struggling to remember why I do it, or needing a little gratitude, was I go back to what I call my baby hospital. When I very first started, I was probably, I couldn't have been more than two months off orientation. And I was working in this ER, and we were a small, small unit. We had eight beds, we'd see, 32 patients a day, usually in a 24 hour period. So, full staff was two nurses from six to six and one nurse from what we call noon to moon, 12 to 12 midnight. And that was it. So, you just had you and your co-pilot.

But we had this sweet, sweet, old man. He was the chaplain. And we got to know this gentleman. I mean, he was there every day, whether there were patients, or not. He would come in and he basically lived there. He was just this amazing, amazing man. And there was one night he came in, unfortunately as a patient, not on his chaplain duties. And he was in a bad way, you could just hear it in his breathing and he wasn't doing well. So the other nurse and I, we started doing what we do. Right. And got him hooked up to the EKG. We got our large bore IVs. We were doing all the right things and it just wasn't going our way. And we knew it and like I said, he knew me from the day I walked in the door, so he knew that I was brand new.

He knew that this was incredibly hard for me. And he must have seen the look in my eyes at one point, because he grabbed my hands and he stopped. And again through his labored breathing and he's like, "Jon slow down." He's like, "What you're doing, isn't going to change what's coming." He goes, "Listen I've been on this side for a long, long, long time." And he goes, "I'm not afraid to die." He's like, "But getting there really sucks."" And he's like, "I just want you to sit here and hang out with me for a minute." And so I did, and we stopped what we were doing at his request and just sat and talked with him, it was probably another two hours or so. And then he passed and it was incredibly hard at the time.

You're still new and trying to learn and understand, death with dignity and stuff. That wasn't ... Your ER brain and training screams, "You save people no matter what." Right. And so I would say that that was one of the strongest moments for me, was just his appreciation for, instead of trying to save his life, being there instead, and just being present. Right. And his appreciation from his wife after. And that's, I think what UC Davis does for me, that I hadn't felt in a really, really, really long time was our focus on ... He see me as a person and reigniting the spirit of caring. It stirs up these same concepts, that showed me so many years ago, but this is the first opportunity and first place I've been that focus on those things as an understanding and an importance of a foundation for our nurses.

So, I think that's what holds so dear to me about those classes and just what UC believes in as a whole and like I said. So it's opportunities that I've had like that that always used to make it really easy to remember why we go through some of the hardships we go through in our profession. But it also gives me that realization now and I would say my transition into management has been because I loved being a nurse. I loved it so, so much. And yeah, some days are harder than others, for sure. It's never an easy, easy, easy way about it. But I can look back and as a travel nurse for years, I had the opportunity to be in a lot of different systems and experience a lot of different cultures.

And I would say that the cultures that helped to me be successful and appreciative of what I was doing were monumental to me. And I would also venture to say they limited, unfortunately, they were kind of the minority. And so I guess what I've learned is I just want other nurses to love what they're doing as much as I used to. I want them to feel that same passion for what they're doing and want them to get through those hard times, knowing that they're still able to do what they love. And the way that that is successful is by promoting an atmosphere and a culture that enables them to be successful and not have to worry about a lot of the underlying issues that they shouldn't have to be worrying about, so that they can just focus solely on their care delivery and their personal growth.

And so that's my goal. I would say each day in a managerial role is I want to provide that type of environment for my people. And I oversee people that are not nurses, right? I've got clinical lab scientists, I've got data managers and I've got nurse case managers. So, while they are nurses, they're not directly at the patient bedside giving that care. So, I've got this very valuable opportunity to gain an understanding of what ties them directly to their joy and their passion and their care delivery. And then just try to provide them the resources to help them achieve that. That's what I look at, I guess as my primary responsibility.