Julie recalls a patient experience that taught her that no matter the situation, every person has a soft spot and has personal needs and if you can make a connection, your care can change their life. 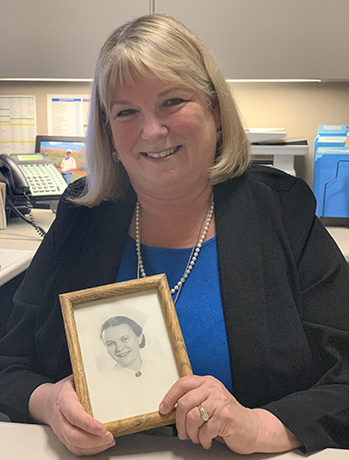 Because in 40 years, there're so many stories, but there's one particular story that resonates and has stayed with me. And that was when I worked at this hospital, Brookside, in San Pablo. I was a fairly new nurse, and it was a community hospital, similar patient population as UC Davis. And I worked the evening shift, I was a charge nurse. And there was a patient who had had surgery. He was a gang member. He was a drug addict. He was there for surgery to do INDs of his abscesses in his arms.

And he had come back from surgery and I was just coming in, actually walking through the rooms, trying to decide how I was going to make the assignment for the staff. And he greeted me as I walked in the door. He had pulled his IVs, so he had blood down his arms, he was out of bed, his dressings were falling off. And he very angrily said that he was in so much pain, if he had a gun, he would blow my head off.

And I was a fairly young nurse in my career, and it really frightened me because I took him serious, and that he had his hands in fists, and he looked very angry. Of course, I turned around. I said, "I'll be back," turned around and called the house supervisor, administrator. This was in the evening shift. And I kind of got resistance from the health system that said, "He really didn't mean it. He doesn't have means to do this. He's not going to harm you."

And I kind of had to reset right there and determine how I was going to manage the situation. So, very rapidly, listening to what he said, I paged the physician to try to obtain a different type of medication. Obviously, with his drug history, what we were going to give him really wasn't going to touch what his problem was. I mean, he wasn't getting his street drugs, plus we caused him to have pain from this major surgery that he had.

So, I got the medication changed. And then I basically, just around the clock while I was on my shift, would check in, and when it was time for medication, was practically had the medication, and said it was time because he was really not getting a lot of pain relief. And so, I had a colleague who we job shared, and she was the type of nurse who, the person would ring their bell and she'd say, "I'd be right there in a minute," and a minute would be 20 minutes. And I, on the other hand, when I was working my shift, I was like, "Oh, it's been four hours. I'm going in there." And I had the prescription, his medication, with him. So, I really stayed on top of it.

I think he saw my efforts to try to make him comfortable. I also tried to look at him as a person to also see what seemed to give him pleasure. I knew that he would talk to his family, his mother, on the phone. And so, some days I'd come in as I'm doing my assignments saying, "Oh, did you talk to your mom today?" and trying to engage with him as a person. And I think, within so many days, he turned around, and when I'd come on, he'd say, "Oh, you're on today."

And I think I learned a big lesson that, one, if someone threatens you and they're hospitalized, they may need to be hospitalized. They're not going to take the patient away. That you're going to have to figure this out and care for the patient. But I also realized each individual person has a soft spot and has personal needs. And that if you focus on those needs and what's endearing to them, that you can make a connection. And so, I think, through my nursing career, when I look at patients, many times I look at them as, "Oh, this could be my grandfather. This could be my mother," and really try to care for them with compassion, concern, as if this is a family member.