Giving power to the patient

Kelly describes how she learned that patients are at their most vulnerable in the hospital and how nurses can give them their power to speak up.

Kelly was interviewed on Capital Public Radio for their Insight program. Listen to the interview here. 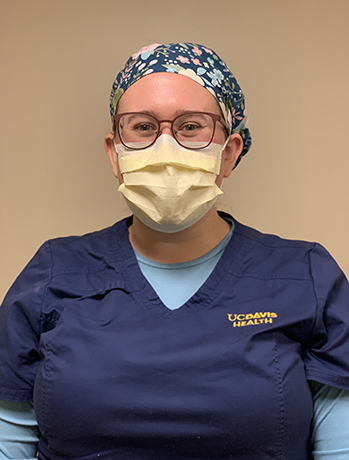 To summize the situation, basically there was a patient who the team felt wasn't able to reliably know what was going on and wasn't able to communicate. I'd been working with this patient for a very long time, and I knew that he knew what was going on. He could follow conversations. He had some hearing issues and vision issues, but if you gave him his glasses and wrote, he could read and mouth his words to respond. So, we had to make this really big decision and eventually, we were able to get everyone in the room, get his family in the room. I get a little emotional talking about it. Sorry. And just write out what he was saying. I would write out their question because he couldn't hear. He would read it, and then he would mouth his response. And I would write out, "I think this is what you're saying."

And then he was able to make his voice heard still, which is so important because people have their power taken from them when they come into the hospital, and anything that we can do to let their voice actually be heard is so important. He had the surgery, and then he stayed in our hospital for several months after. Eventually, he did pass away, but we gave him every shot and kept him involved with everything. The family was really grateful at the end. It was tough for them, but at the end, they were really grateful too that we fought so hard to have his voice in the conversation. So, I felt really good about that. People are so vulnerable at the hospital. And to talk about power again, all their power is gone, right? They're in an unfamiliar environment. They can't do what they normally want to do. They have stuff stuck on them. People are coming in and out all the time. So, I think just empathizing with that feeling and for those people. I still have a tender space in my heart for a lot of my primary patients.

Sandie Dial: It’s never too late to find your passion