NICU is in no one’s birth plan

As a former NICU baby and now NICU nurse, Rachel talks about her love of the NICU, including being a primary nursing advocate and nurse who tries to give parents a little control in an unexpected situation. 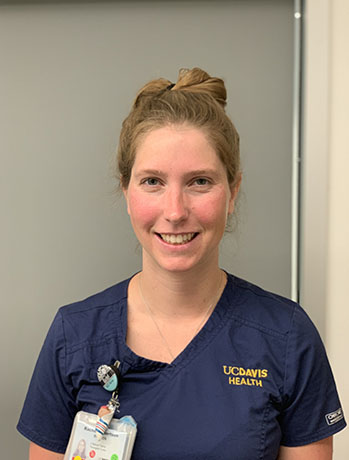 I actually initially never considered nursing because my mom's a nurse, actually come from a generation of nurses, I'm the fourth generation nurse in my family. So I've got my great grandmother and my grandmother and my mother, and now me. To me, nursing was what she did, until I got into college and started taking more classes and realized, oh, it's not just what she does, there's like a whole wide, broad spectrum of nursing. There's so many different career choices and options and flexibility. So that's really what I was looking for.

Then when I went in to become a nurse, I knew I wanted to be an NICU nurse because I was actually an NICU patient, locally here, not at this hospital, but locally. I kind of wanted to take it back to where my start in life began and I've always loved children, babies, especially. So that was kind of like the right fit for me. And it felt like what I should be doing, like my purpose in life, because that's where I started so that's kind of where I wanted to devote my time.

We always joke in our unit, the NICU is in no one's birth plan, that's nobody's birth plan. Nobody wants to have a child in the NICU. So that loss of control for parents is often a very difficult thing, especially when it seems like the ones with the most complex birth plans usually end up having these NICU patients, who they had this whole birth plan planned out to a T and things don't go the way they want. Now we're taking care of their baby. They can't take care of their own child, that's such a hard transition. So helping those parents through that and helping them feel included and a part of the care team, because they are such a huge part of the care team is one of the rewarding aspects of working in the NICU.

I'm actually a huge proponent of primary nursing, I'm on our primary nursing committee for our unit. As well, I really was introduced to it by some senior nurses when I was new. We have a policy in our unit that for their first year, they don't want you to primary because you're such a new nurse they want you to see all kinds of things and learn. I was one of those people that at my year, I was like, okay, now I can primary. I was ready to have that connection. It's hard to really explain the connection you form and the bonds you form with a patient and their family through primary nursing. The care is just so much better because you have the same person or group of people, often we'll have many primary nurses for one baby, seeing that baby day in and day out they really get to know the patient.

Then when you have different medical providers transitioning in and out, oftentimes they'll defer to us, "well, you're the primary tell me is this normal? I haven't had this baby in a while." So we really get a lot of autonomy that way and we really are able to make an impact on the care plan because we know that patient best. I feel like they get better care having primary nurses and families can't say enough good things about primary nurses, the ones that don't have them are like, "how do I get a primary?" The ones that do just, those bonds go beyond the hospital stay.