Sally shares how she was reminded that, especially in nursing, the little moments remind nurses that their human-focused care makes a difference. 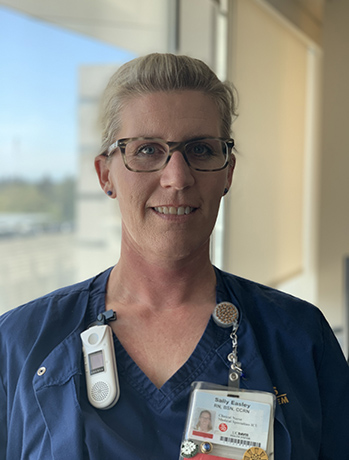 I think it's the small things, the small moments. I will never forget, I'm going to use this as an example, but I had, years ago, a primary patient, she was very delirious and I just would talk to her because I mean she would just grabbing at stuff and looking all around, just typical. And I just started rambling because I took care of her every single day and I was just like, okay, I'm just going to start rambling. And I was living on a rice farm at the time they plowed the fields around the house and I got infested with mice and so I was telling her about my mouse problem because nobody else wanted to listen to that, and two weeks later, maybe it was longer, I can't remember now. But we had capped her trach and she was occluding. We hadn't capped it, but she was able to occluded it at that point. She was still delirious but we were working with her with her speech and I came on the morning. She covered up her trach and she said, "Did you ever call the exterminator?"

I'll never forget that. I'm like, whoa, "No, I took care of it myself." You wouldn't think I would have, but then I had to explain all that. So I don't know. I think it's those little moments that you realize you're reaching through to people, even though it doesn't appear that way.