Stacey recounts an incredibly powerful experience with a patient and her family, who reminded her that people aren’t always what they seem. 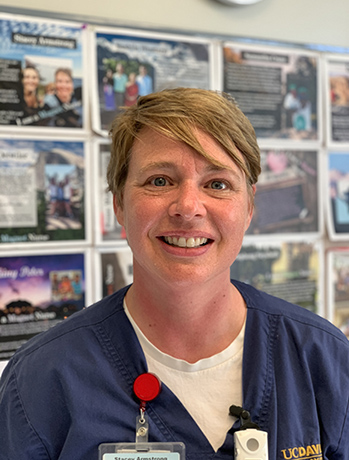 There was this 54-year-old woman. This is probably my most vivid memory of almost like a culture shock feeling. When I was in the Navy, I was in Korea in Pusan for a period of time and I had to make a phone call, and I was by myself and 3 million other Korean people. No one spoke English. There was no English anywhere. I was from a small town in Upstate New York, and I was probably about 18 years old when this happened, so I had literally no world experience in this.

I realized I didn't know what coin to use to make a phone call. There's all these people around, and this guy comes and sees me. I don't know if he's going to steal my money or what, but he's digging through my money and he realizes that I don't have it either, so he takes it out of his pocket and hands it to me. It happened to be this beautiful gold butterfly coin. I was like, "Oh," and he just handed it to me to use. So I was like, "Great, thank you so much." So then I go to use it and I can't get an English speaking operator on the phone. I don't know how to use the phone. I don't know how to call and I need to call my ship. So I remember that incredible feeling of complete culture shock and just feeling disoriented. This is a similar situation to me, in a way that it felt similar in my soul.

So at this point, I had been around patients for probably five or six years. I wasn't a newbie by any stretch. You start categorizing people in your head, of how their reactions are going to be, and what's going to happen, how this is going to unfold based on some body language and stuff like that.

So I meet this 54-year-old woman. She is flown in from somewhere upstate, came down, needs a liver transplant. Gets put on the list for a liver transplant, turns out she has alcohol in her system, and so she gets taken off the transplant list. She's in fulminant liver failure. She's not going to survive. Liver failure death is not fast, but it's not incredibly slow either, but she was at end-stage liver failure.

Over a period of time, her family start showing up. Very emotional, very skeptical of healthcare system in general. And then this guy shows, walking up, and I remember him walking down the hall, and he has a bald shaved head, mustache, flannel shirt, lots of tattoos that look either homemade or prison made tattoos, across the knuckles. Pretty sure it was a good gang sign going on here, something like that. And I'm just like, "Oh geez, this is going to be terrible."

And my previous experience was leading me to believe that this is going to be a big conflict of you're going to try to kill my mother. You're going to let her die. So I think on some level, I was probably getting prepared for that. We're setting up a family meeting to let them know that there's nothing we can do for her. She's not going to survive this and how do they want to proceed? Basically, there's two choices. Do everything, to the very last thing, or start to prepare, to withdraw care and make her comfortable, that type of stuff. So I was not looking forward to this conversation and I hadn't really come into this place yet for this conversation. I hadn't started working in that level yet, but this is probably what took me in this direction was this was really practice changing for me.

So he comes along very gruff, really intense, defensive presentation, totally disregards me when I say hello to him and stuff. And he goes in the room and he starts talking to his mom and I'm just like, "All right." So I go and do my thing and we get ready for this meeting. Still, no softness from this guy at all. He's just a really strong guy. But what I've gathered from this is that he is the leader of the family now. He's maybe in his early 30s, mid 30s, but he's going to be the one making decisions. He is leader of this family.

We go into this meeting, the doctors are kind of talking to their thing. I say my spiel. Social worker says her thing. And then lots of family conflict, yelling, "You're going to kill my mom." All the things I expected to happen. All of a sudden he just stops. He hasn't said anything the whole time. He stops everything. And he's like, "Wait a minute." And he starts asking his incredibly thoughtful and emotionally intelligent questions, like, "What would this look like? Is my mom going to be in pain? How is this going to feel? How long do you think?" These questions that typically don't come out of this type of what's usually happening, especially the first meeting.

And it was so shocking to me that he just really was able to quiet everyone down and really focus this into about his mom. Not about him, not about what everyone else is feeling, but what was happening for his mom and what was this going to be like for her? And what was this experience going to be like for her? He didn't really make a decision at that point. He gathered the information and the meeting basically came to an end. He said, "I want to think about things." He was going to talk to the rest of the family.

And then he came out and he was talking to his mom. They had a conversation and then he was singing to her. It was the sweetest, Oh my God, softest, loving thing in the way that he interacted with her and talked to her about what the information he got and what did she think? And then he came to me and he's like, "I think that we made a decision. I'm going to go talk to my siblings. I'll come back and talk to you in a few minutes." And then he came back in and he's like, "Yeah, we want to withdraw care. And this is what I'd like." He's incredibly respectful and kind. He sat with his mom.

The thing that I thought was so wonderful about this is that he, a lot of people really make it about them and dealing with their concern about the grief they're going to feel when the person leaves, and he stayed so present with her for that whole time. He held her hand. He combed her hair. He washed her face. He just sat with her. He sang to her. He talked to her. They played cards. And when it was all over, at one point, he and I developed this very close relationship and getting towards the end, she was struggling a little bit. And I was like, "It's okay to give her permission to go." And it was really hard for him to do because he felt like he was somehow contributing to her dying, but he did. But what I found for a lot of people, that it actually really gave them some release too, the people that were able to say, "It's okay," because it's telling themselves it's okay, too.

She died very shortly after that. And very peacefully, within minutes of him saying, "Mom you can go. I want you to go. We'll take care of ourselves. We'll be okay." And he came back and he brought me flowers. He said, "I'm so grateful to you and everything you did for me and my family and my mom." And the thing I learned from that is I prejudged what I expected to happen. I had myself set up in an emotionally distant way, that really prevented for... Well, I don't know how much it changed, but I was really grateful I was able to be open to see him for who he was and not who I imagined him to be. And it has changed my whole practice, in terms of I've been in very complex social situations professionally since then, and have been able to stay really present with who the person is and not who I imagine them to be. And he gave me that gift and I'm incredibly grateful for it.