It’s the bond with people

Susan discusses how bonding with people both makes her want to retire and makes her show up every single day. 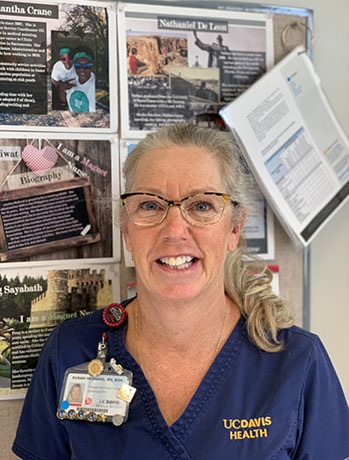 It's interesting because I think that it's the thing that holds me here is the same thing that's going to make me want to retire, and that is just the ability to care for people. And that I feel like my patients, some of them, are my friends, and I have a really close bond with them, and I really enjoy. If we don't see them for quite a while here, I'm like, "When's their next appointment? Do they need an appointment reminder?" Just to check on them and see how they're doing, especially with this COVID thing. I was kind of worried about some of our patients.

But also, I feel like the suffering, to see people suffer, that's what makes me want to retire. Sometimes I don't want to see that anymore. I don't want to see them. What we do sometimes, we patients that kind of slowly, you can kind of see that what we're doing is only patchwork, buying them a little time, and that you know that we're going to lose them. And so that, although it seems more sane and controllable and I'm way less exposed to things that people did to other people than I was in the ICU setting or the ER setting or the fire department setting.

So here, it's the same thing. It's that bond with people that keeps me in nursing. But that's also what is the hardest, so hard about it, because you do bond with people, and you know you're going to lose them. But I just feel like what I need to do is to distract them for a while from the idea that they're going to die or hang in there with them and listen to them when they talk to me about that they're dying and that they've written their eulogy and things like that. So I feel like that's hard. I mean, there's some days that's hard.

And what keeps me coming back? Probably this team. I love this team that we have here. UC Davis is a good place to work. Great benefits. I think I'm, in general, a workaholic. So my yard is immaculate right now with this COVID thing. But I'm a worker. And there's just such great satisfaction in it, that you know that you helped somebody. And sometimes with our apheresis procedures, I mean, if somebody is having a chest crisis where they can't breathe, just at the end of our procedure, they're breathing better and their oxygen's better. So there's a lot of instant gratification, a lot of gratification in what we do here.

We recently had a patient that he came in in the fall, and he's losing 3% of his lung capacity every month. We can kind of hold that off and lessen that with the procedures that we do. And we, for the life of us, couldn't get access on him to do a procedure. So we ended up having to have a port placed. And the whole time the guy is just pleading with us, "Just get me to March. Just get me to March. I have this big trip planned with my grandkids. I have to go in March." And we did. We got him there. So that was really, really cool to know that the patients, that we're really making a difference for them. And he's still losing his lung capacity, but the day that he walked out of here to go to Disneyland with his grandkids, there were three or four of us that were crying because we did that for him. We helped him with that. So, yeah.

So I think that's probably, more than anything. If I did a job where I didn't know that I wasn't ever helping people or I wasn't making them better, I'd probably go, "Oh, what am I doing here?" Plus I think that with apheresis, we don't have to do procedures that hurt them often, just the IV starts. So that's kind of nice to have a nursing job where you're not hurting people. So you're making them better. So-