Toby shares a story about a couple he cared for who taught him that the role of the nurse is not just medical help, but helping people through some of the most vulnerable moments of their lives. 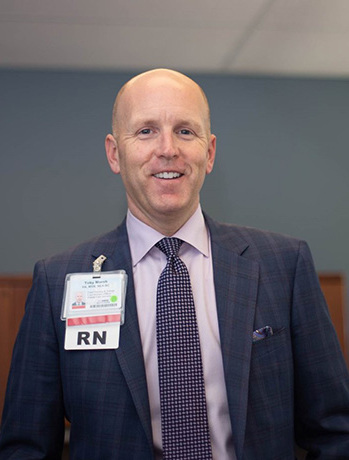 But I remember a few stories that really impact me, still to say, or I reflect on. I remember this one moment on MSICU Gold, now it's MSICU Gold, where it was a homeless couple and she was dying. I was working nights and I don't know if it was the husband or boyfriend. And I think it was the boyfriend. It was the boyfriend of this patient would come in at night and only for moments and would come in and be with her. He'd come in and sit with her, hold her hand. She was intubated and that was his world. I think she was with us for about a week and he was doing the best he could do as well, coping. We would spend time together as well, talking about how she's doing, how's he doing, and sometimes there would be little words or a nice discussion.

But I remember over the course, he would show up in less frequency as well. I think he was trying to prepare himself for the passing of his girlfriend, and she was really unstable towards the end. I remember her blood pressure was labile, so I'd go in there, because he did not show up or I was waiting for him to show up, but I thought he would. And so I'd go in and I would shake the bed a little bit and try to get her to wake up or just hang on there a little bit more so that hopefully he could be there.

So finally, after probably, I don't know, seems like hours of trying to maintain her so that he could get one last visit with her, he finally shows up and I'm like, yes. I share with him how she's doing and her blood pressure was dropping and we were not going to resuscitate her and that was already pre-planned, predetermined. And they were able to finally, he was able to say goodbye to her. I remember after, well, he shows up and I leave, give them some time and in that time she ends up passing. And so, it's moments like those for me or things like that or in that moment where we get to help facilitate people's moments in life and we get to be there and help them to the next. And sometimes we don't know what the next is.

I think when they were coming in, we were hoping her next would be going home and it wasn't, but I had the good fortune to help and be there, be present and mindful enough of this relationship to help him have a moment and some closure. So he could go on to his next and I will never know what that is, but it's moments like that that make me honored and privileged to be a nurse, to help people through some of the most vulnerable times of their lives.