The rain never felt so good

When she became incredibly ill, Virpal experienced firsthand the impact that nurses like her have on patients and how to treat patients with more than medicine. 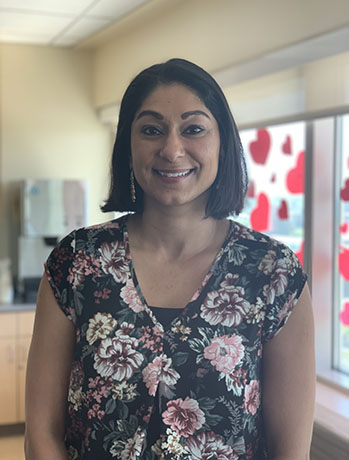 So, towards the end of 2017 I started to get pretty sick with what I just thought was normal respiratory symptoms at that time. I had gone to my local ER and they had said, "Oh, you just have the flu. Go home. You'll be fine." Although my gut was telling me not to go home and I wasn't ready to go home they still insisted that I went home. Over the next 24 hours I decompensated really quickly to the point where I passed out and woke up and had to go get my husband and say, "Hey, I've got nothing left. We need to call 911."

I went back in and was transferred back to the same hospital. They I think appreciated a little bit more my clinical picture. I was admitted to their ICU with flu and at this point I was septic and I from there continued to decompensate pretty quickly. At that point, my husband had felt that this facility was not listening to him about how ill I was, the things that I needed. He very wisely reached out to a fellow PICU nurse and a PICU attending and said, "Hey, you need to come here. They're not taking good care of her."

In that interim I had continued to further decompensate to where when the PICU physician went to this other facility she saw how bad I was, insisted that I'd be emergently intubated and receive some procedures. And was worried that I was going to get even further ill and insisted that I be brought to UC Davis for possibly the need for life support as far as ECLS, Extra Corporeal Life Support. So at that point I was transferred to UC Davis and for about the next week I was in and out of consciousness in the sense of I was intubated, I was sedated, but I was still fighting quite a bit and that was my husband's hardest journey.

For me my journey that was so challenging was when I woke up I had so many medications on board and I became extremely delirious. I had a lot of delusions. I had a lot of hallucinations. I was very, very paranoid and it was the nurses that just kept recentering me to keep focus. That they took away from the delusions but they just brought a sense of calm. And over the next few days when I was recuperating it was just their touch, their compassion, their respect of me as an individual that really just made me look back at my profession and what I wanted to do differently. And I always thought I knew what it was to be a patient and to lay in that bed and it's so completely different when you're on the other side.

My perspective, I view it as from the other side of the bed rail as a nurse I'm standing, I'm helping the person that's in the bed but for somebody being in that bed you are so powerless and you at times feel like you have no dignity and you have no control and you don't know what's right and what's wrong. And it was those nurses that slowly gave me that power back that helped me to see I will get better, I will get strong.

One nurse in particular when I was very anxious and was having a lot of delusions actually insisted that I be taken outside. And to this day I will never ever forget that feeling of it was pouring rain outside but she took me outside and I will remember till my last breath what it felt like to have that rain hit my face. I suddenly could breathe in ways that medicine wasn't making me not breathe but it was my anxiety. And if she had not done that I know I wouldn't have been able to take the next step into getting better. Because she knew that I needed more than medicine, I needed more than getting out of bed, I just needed to get outside. Because that was my paranoia was being in this room and she took the time to really see me as a person and see what I needed that maybe others didn't need. And she did that for me and I feel like that was when my healing began in moving forward.

Megan Brown: Learning to dance in the rain