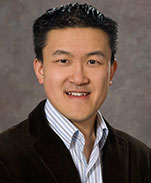 Dr. James Chan received a B.S. in Chemical Engineering in 1997 from the University of California, Berkeley. In 2002, he received his Ph.D. in Chemical Engineering from the University of California, Davis where he studied the interaction of ultrashort laser pulses with optical materials using a combination of Raman and fluorescence spectroscopy and microscopy. After a three year postdoctoral position at Lawrence Livermore National Laboratory (LLNL) in the Medical Physics and Biophysics Division, where he developed laser tweezers Raman spectroscopy as a novel single cell cytometry method for a broad range of biomedical applications, he became a staff scientist at LLNL from 2005-2010 where he continued his biophotonics research jointly with the NSF Center for Biophotonics at UC Davis. At LLNL, he was also involved in research developing optical sensors for chemical sensing applications. In 2011, he was appointed Assistant Professor in Residence in the Department of Pathology and Laboratory Medicine at the University of California, Davis. Dr. Chan has co-authored over 30 publications in refereed journals and book chapters.