Message from the Section Head

Keeping things lighthearted is what makes this PA a success 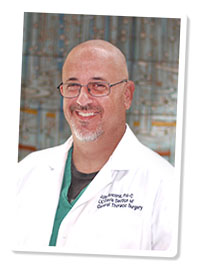 John Ancona is a Physician Assistant (P.A.) within the UC Davis Heart Center and has focused responsibilities with the Department of Surgery Section of General Thoracic Surgery. Having been a P.A. for the past 26 years, the last two here at UC Davis, John describes his road to be a P.A. was a circuitous path. He was accepted to medical school after graduating college but deferred as he wasn’t sure that was the best path for him. After a two-year stint teaching and receiving a Teacher of the Year award, John decided his heart was ultimately telling him to return to medicine. He was immediately accepted into medical school but paused to reflect once more. After discussions with an uncle about considering a physician assistant program he decided that was the route to take. “I interviewed and had no idea really what a physician assistant was”, he said.  He hasn’t looked back since.

John was recruited to UC Davis from the east coast and having a great team was really important to him. He knew UC Davis was an established institution, and that the Section of General Thoracic Surgery was growing, and wanted to be part of that growth. “Dr. Cooke (head of Thoracic Surgery) is probably the easiest person I have ever had to work for. Dr. Brown is one of the greatest people I’ve had the opportunity to work with and together, she and Dr. Cooke are a dynamic team. Knowing that there was not only an amazing surgical team established, but a professional and enjoyable camaraderie is what ultimately drew me to this role.”

John’s training focused on the heart, lungs and vascular system, and he sees a lot of lung and esophageal cancer in his current role. He also understands the severity of these diseases. By connecting with patients, he realized if he could help them see the lighter side and help make them laugh while they’re being treated, then it’s been a good day. “If I can make someone laugh or bond with them to help make their outlook a little less bleak – a little lighter, then I’ve done my job. So that’s what I bring to the job.” Most recently a patient comment was shared with his team that made him laugh. They mentioned “Dr. Brown’s PA John was wonderful, he's crazy and funny, but mostly just really good at this job.”

When asked what he hopes his professional life looks like in five years, he says the following “I’ve been an educator, an administrator, I helped establish a PA program and was a clinical coordinator. I just like the bedside and interacting with patients and the fulfillment of helping make someone feel better and going home; having a new lease on life. I’ll still be in medicine doing this job and I hope I can stay here at UC Davis in thoracic surgery for years to come.”