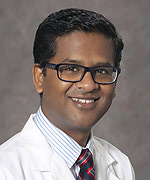 I will treat every patient in the same way that I would like my family member be taken care of, and I will strive to make sure that no one suffers for lack of knowledge, effort, or compassion on my part.

Treating biliary and pancreatic diseases, treating everyday gastrointestinal problems such as heartburn and constipation, screening for and preventing colon cancer.

Mentoring Gastroenterology Fellows in their clinical, academic, and research endeavors.

American Board of Internal Medicine, 2007

American Board of Internal Medicine, Gastroenterology and Hepatology, 2010