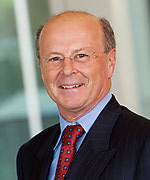 A member of the UC Davis faculty since 1982, Dr. Meyers has distinguished himself as a national expert in hematology and oncology, with a special emphasis on cancer molecular biology, metastatic cancer, end-of-life care and pain management. He served as chair of the Department of Internal Medicine for 12 years, senior associate dean for academic affairs and medical director of home health services.

Under Dr. Meyers’ visionary leadership, the Department of Internal Medicine flourished as a productive and dynamic center of academic medicine. With a focus on translating basic science research into clinical therapies and advancing the practice of evidence-based medicine, the department’s academic and clinical programs have made high-impact innovations to advance health.

Dr. Meyers is a longtime leader of the hospice movement in the United States, establishing programs that are now national models for providing compassionate, end-of-life care. He is well-known for his work in "simultaneous care," a model of care that allows cancer patients with advanced disease to receive both investigational treatments and palliative care.

Dr. Meyers is also the executive director of Medical Education and Academic Planning for the University of California, Merced. He is leading the effort to begin a UC Merced medical school that would train new physicians in the San Joaquin Valley to provide care in the medically underserved communities.

American Board of Family Medicine, Hospice and Palliative Medicine, 2007

American Board of Internal Medicine, 1980

American Board of Internal Medicine, Hematology, 1989

Association of Professors of Medicine

Fellow, American Association for the Advancement of Science, 2013